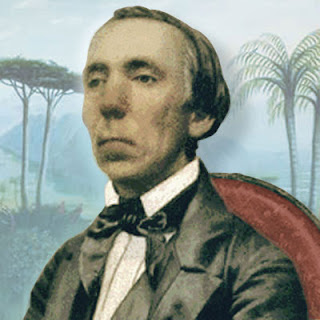 In the winter of 1824-1825, Field traveled to New York City and studied art under Samuel F. B. Morse, credited not only with inventing the Morse Code, but also with introducing photography to the United States.

Morse, above, was an artist of stature, and his portrait of President James Monroe today hangs in the White House. One wonders about Field's short stay with Morse. Did he run out of funds? Was he discouraged? What we do know is that Field returned to his rural home of Leverett, Massachusetts and began a career as an itinerant artist in a rather isolated area.

Field's first known painting is a portrait of his grandmother, Elizabeth Billings Ashley. Many of his sitters were friends and a very extended family.


What we can see from Field's portraits is that they were very formulaic. In fact, the greatest difference in the three portraits above is the scenery beyond the red curtains. Most itinerant artists of the period — or limners — would paint canvases with generic bodies during the winter months, then simply add a client's face at a later time. I've read that Field was different in that he painted faces first, and would add all the rest later. In any event, he was unable to make a living as an artist because, ironically, his teacher had introduced the country to the daguerreotype. Having an exact likeness on a small plate supplanted the work of many lesser portrait painters.

Field continued to paint, however, and turned his attention to Biblical themes. Above is one of several versions of the Garden of Eden. Below is He Turned Their Waters Into Blood, one of a series of paintings depicting "The Plagues of Egypt." Field apparently enjoyed painting architecture, and architectural elements appear more and more in his later paintings.

Field's most famous painting is in every way monumental. From 1867 to 1888, Field worked on The Historical Monument of the American Republic, below, a canvas that measures 9'3" x 13'1".

Comprised originally of eight towers, with two more added later, the painting chronicles American history from Jamestown to 19th century events. Field conceived the monument to celebrate the 1876 Centennial, but continued working on the towers into his old age. Each tower has faceted panels depicting important scenes in low relief sculpture. I've read that Field enjoyed sharing his work with neighborhood children, providing them entertainment that must have been somewhere between a history lesson and a travelogue.