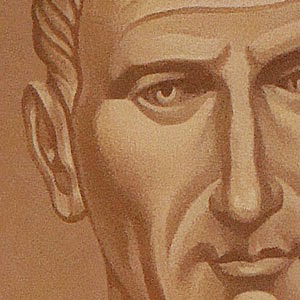 The next stage in the decoration of the Pompeii Room is to incorporate the images of five successive Roman emperors. They reigned at the height and might of the empire, during a period of relative tranquility that became known as the time of The Five Good Emperors.

(History buffs and authorities will have to excuse me, since all five reigned after Pompeii was already covered by ash. This will just have to come under the heading of artistic license!)

In fact the Emperor Titus, son of Vespasian, ruled when Pompeii was destroyed. Titus was succeeded by his brother, Emperor Domitian, whose reign was one of terror, at least for everyone in close proximity to him.

Domitian was assassinated, and the Roman Senate, weary of the last several reigns, decided to appoint one of their own, an elderly senator named Nerva, shown above. Nerva was popular within the Roman Senate and a fair and just man by the standards of the day. His surprise ascension might be likened to that of Gerald Ford in our own time.

Nerva (30-98 A.D.) was the first of the Five Good Emperors, and a bas relief bust of him will fit into the niche on the left side of my transom.

Here you see three busts of Nerva, each one more stylized than the last. We can be certain that Nerva had a cleft chin and a small mouth, and perhaps a rather pinched expression. But determining how he really looked is almost akin to a forensics case.

One thing that has occurred to me is that the center bust appears to use the image of Caesar Augustus as a template. I will use that image, but narrow the head slightly and combine it with the smaller mouths seen in the other two busts. 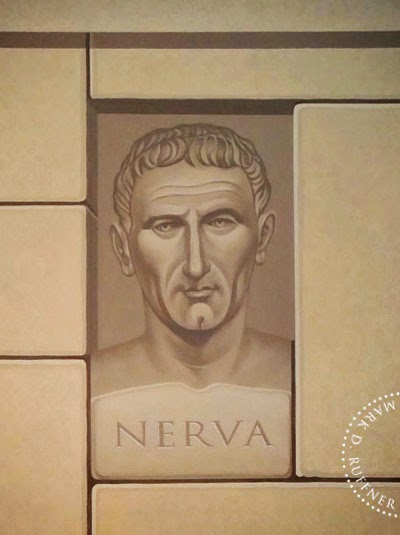 Here's my version of Nerva. Because of his age (65 was quite advanced by Roman standards) and because he appears to have had a smaller jaw, you will notice that I have given Nerva slightly hollowed cheeks. Next week we'll look at the second of the Five Good Emperors, Trajan.
.
Posted by Mark D. Ruffner at 8:00 AM