Sandro Botticelli (1444-1510), whom the great biographer Giorgio Vasari referred to as "Botticello," attained a style we've come to recognize as all his own. But that's a disservice to his teacher, Fra Filippo Lippi (1406-1469), who is now less well remembered.

Botticelli was apprenticed to Fra Filippo Lippi while still a restless young boy. Fra Filippo Lippi became very fond of his apprentice because Sandro threw himself into learning and imitated the master closely. And if we make some comparisons, we can see that works by the mature Botticelli retain the influence of his master. 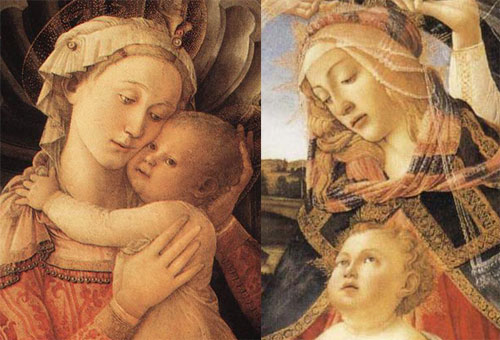 Above are two Madonnas, on the left by Fra Filippo Lippi, and on the right by Botticelli. A trademark of both artists is that they tended to define flesh in soft gradations, somewhat denying skeletal underpinnings. Features were often outlined, and we can see that especially in their treatment of hands. 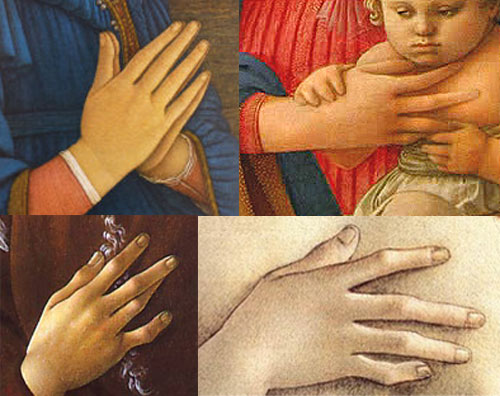 At the top are hands by Fra Filippo Lippo, and below are hands by Botticelli. You're not very conscious of knuckles in these, and you'll notice that both artists extended the length of the fingers. Such lengthened features made Botticelli's women particularly graceful, and it's no mistake that when we think of Botticelli, we are bound to think of Venus rising from the water.

Botticelli is also remembered for his exquisite delineation of hair, and here again, one has only to look to his master to see the influence. On the left, hair by Fra Filippo Lippi, and on the right, by Botticelli.

Botticelli of course established his own studio, and went on to work for Pope Sixtus IV and the great Lorenzo de Medici. If we look at what I would consider to be Fra Filippo Lippi's masterpiece, The Adoration of the Magi, it looks quite different from anything by his pupil.

And yet if one looks at La Primavera, Botticelli's famous painting of love and spring, one still sees the influence of Fra Filippo Lippi in the tapestry-like painting of the flora.

According to Vasari, Botticelli was generous to other artists, and was famous for his practical jokes. Unfortunately, he became a follower of the priest Girolamo Savonarola, and according to Vasari, even destroyed some of his own work in the infamous Bonfire of the Vanities. Botticelli, having given up painting, died destitute.

Email ThisBlogThis!Share to TwitterShare to FacebookShare to Pinterest
Labels: Bonfire of the Vanities, Fra Filippo Lippi, La Primavera, Sandro Botticelli, The Adoration of the Magi, Vasari