The Allure of Antique Buttons 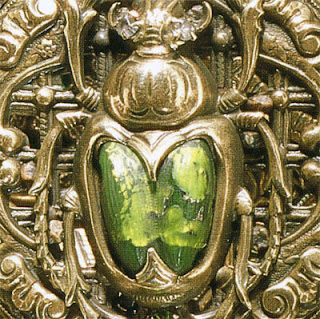 Regular readers of this blog know that one of my passions is collecting antique buttons. (You can see some of my own buttons by clicking on "The Button of the Month" on my side bar.) This past weekend, I went to a button show hosted by the Florida State Button Society. Collecting buttons has become a hugely popular hobby, and if you had seen the amazing displays that I saw, you wouldn't be a bit surprised.


For sheer size and glitz, the most dramatic buttons are probably those called "Victorian Jewels." These buttons usually measure 1½-2" in diameter and were once used by Victorian ladies on coats and capes.

Most dealers display their buttons on thin cardboards, like the one above. The button you choose can be easily removed from the board.


The show featured a lot of copper 18th-century buttons, also in the 2"-diameter range.

I was introduced to a style of buttons known as "Jacksonians." These were popular in the early 1800s, and were used on waistcoats. Though they were produced by different makers, they were all made from brass, had the same distinctive rims, and measured approximately ½". They were worn on civilain clothes, despite looking rather military.


Betsy Ciffone of Clinton, Tennessee, stores her buttons in jewel displays, and antique buttons are indeed often little gems. One of her buttons that caught my eye is the tintype portrait below. Such photographic buttons were a popular genre in the mid-1800s, although this was the first one I'd seen. 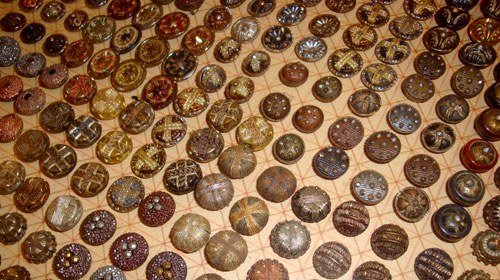 This is a framed display made by John C. Hepler, a tailor who started collecting in the 1850s. Mr. Hepler is famous among button collectors because in the 19th century he had the largest collection in the country, numbering over 78,000!

Uniform buttons, and not just military ones, are popular with men. The buttons above are from livery, the uniforms of servants. Families of nobility and wealth would have personalized buttons made with their own family crests. 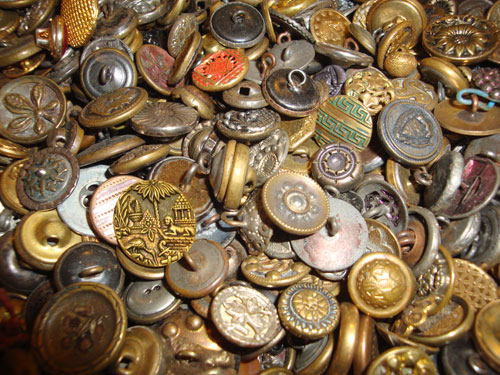 Button dealers buy large collections and often have lesser buttons in quantity. Some will put their excess in a large tray and sell them for a flat price. They call such trays "pokes," and this is what a one-dollar poke looks like.

I'm a neophyte at all this, but I'm having fun. I'll be sharing my purchases with you each month on the side bar, but in the meantime, here's a little sub-grouping of Victorian buttons I've collected that appeals to my love of things Neoclassic. I call this grouping "gods and heroes." 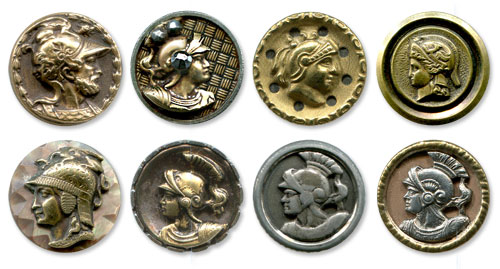