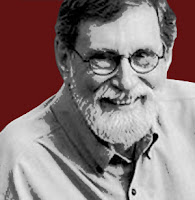 This week I'm sharing the art of illustrator Jack Unruh, and I want to begin by encouraging readers to click on Jack's images to enlarge them. Unruh's art is so detailed and intricately textured that it really merits closer inspection.

Above is the earliest example I have of Jack Unruh's work, a poster he created in the mid 70s for the State Fair of Texas. It has two earmarks of much of his later work — decorative borders and what I will term "subsidiary drawings."

Another Unruh trademark is his use of distinctive calligraphy and hand titling, as seen in the image above and directly below.

Here, members of the Abenaki tribe kidnap women from the Otstungo tribe, a common practice amongst tribes that had lost members in battle or to disease.

In 2006, Jack Unruh was inducted into the Illustrators Hall of Fame. To read his biography and to see more of his portfolio, visit his own site by clicking here.
.
Posted by Mark D. Ruffner at 6:30 AM