A Christmas Tribute To Thomas Nast 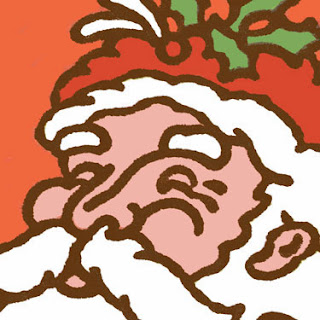 In my last posting I mentioned how I developed a technique of drawing with felt-tip markers, creating "nubby" lines that have an antique look. As part of the same campaign, John Atkinson and I promoted the shopping center with a Santa Claus modeled after Thomas Nast's famous image. In my illustration, Santa is holding products that could be found at the shopping center.

Here is my illustration, and below is the 1862 original. I didn't want to lose that distinctive 18th-century clay pipe! 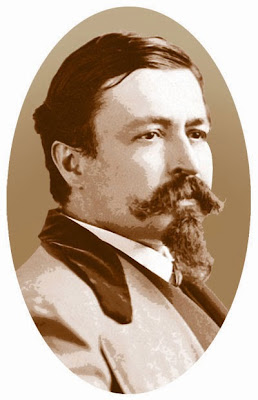 While Thomas Nast (1840-1902) defined the American perception of Santa Claus for decades, he is better remembered as the finest 19th-century American political cartoonist. He is the man who came up with the iconic elephant to represent the Republican party, and while he didn't create the donkey as a Democratic emblem, he popularized it.

Nast began newspaper work while still a teenager, and worked for both Frank Leslie's Illustrated and Harper's Weekly. He used photographs as reference for his stinging caricatures, and was instrumental in bringing down the powerful New York politician, Boss Tweed. When Boss Tweed fled the country on corruption charges and was apprehended in Spain, it was a Thomas Nast cartoon that identified him. Nast's cartoons are also credited with helping Grover Cleveland become the first Democratic President (in 1884) since the 1856 election.

In 1902, President Theodore Roosevelt rewarded the ailing Thomas Nast by appointing him as Consul General to Ecuador. There Nast contracted Yellow Fever while helping others to escape a similar fate, and died the same year.