On Safari With George Eastman: Part 4 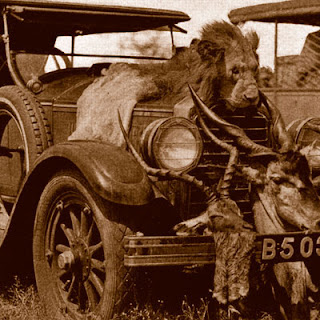 The Eastman Party was the largest motor safari to leave Nairobi up to that time. It had, at one time, 13 cars, 80 natives, 28 camels and 5 mules. It would split into smaller expeditions and spend intervals in Nairobi, as much for constant car and truck repair as for refreshment. The group traveled approximately 4,000 miles, which, considering the terrain and the cars of that time, was a lot of ground.

The months fell into a routine of breakfast at dawn, early morning hunting and lunch at noon, followed by a siesta. Hunting resumed at 4:00 and until 7:00, then allowing for a bath and Scotch highballs before dinner at 7:30 or 8:00. George Eastman slept on an air bed and said it was the best night's sleep he'd had in 20 years.

Dr. Audley Stewart's presence was of great importance, not just because he treated wounds (sometimes with the "new" antiseptic, Mercurochrome), but also because he was treating everyone for malaria with six grains of quinine every night.

As one reads George Eastman's own recounting of the safari, the one personality that really shines through is that of Osa Johnson. Osa was a full partner in the adventures and documentary-making of Martin Johnson. She comes across as vivacious, fun, spunky and helpful — a can-do spirit. I imagine that she'd be a fine addition to that proverbial dinner party where one could invite anyone from any time period. When George Eastman didn't like the food prepared by the camp cook, Osa was quick to set up a separate cook tent and get Eastman to join her in the cooking. Soon Eastman was making pastry shells in saucers and lemon meringue pies, and blowing ostrich eggs with Osa — he reported that they tasted like the hen eggs from home.

But Osa was out on the hunts, too, and helping Martin with the filming of the hunt, which was of special interest to Eastman.

The safari hunted everything in sight, bagging more than 100 specimens. They shot topi, rhinos, impalas, eland, wart hogs, jackals, wildebeest, gazelles, cheetahs and lions — to name a few. Even though they would see herds numbering in the thousands, even by the 1920s, the African governments were putting restrictions on certain animals. The limit for lions was five per person! And George Eastman shot five lions, one of which was nine feet long. He desperately wanted to shoot an elephant as well, but he never got close enough to one deemed worthy.

By August of 1926, the party was in agreement that they had bagged enough trophies, and that the rest of the trip should focus on filming.

At that time, there were three African tribes that still hunted lions by spear — the Lumbwa and their allies, the Naudi and the Masai. These tribes hunted lions to protect their livestock, and Eastman, Akeley and the Johnsons realized that it was a way of life that would be gone within a generation. They wanted to record a lion hunt, and Johnson especially wanted good footage of a lion charging towards his auto. That was not an easy task because lions, particularly those in danger, want to stick to the thick cover of the donga (a donga is a shallow gulch that consists of thick brush and high grass).

Osa and Martin Johnson stayed in Africa after George Eastman went home, and they made many more visits to Africa, shooting documentaries. They both learned to fly, and one of their documentaries became the first in-flight movie. Osa wrote I Married Adventure, which was the biggest selling non-fiction book of 1940. Today you can visit the Martin and Osa Safari Museum in Chanute, Kansas, Osa's hometown.

Carl Akeley, the famous sculptor and taxidermist, was in an accident during the safari that ripped his chest muscles. He died later the same year in the Congo, from a fever.

Daniel E. Pomeroy donated his trophies to the American Museum of Natural History, of which he was a big supporter.

On March 14, 1932,  Dr. Audley D. Stewart made the announcement that George Eastman had committed suicide. In the six years after the safari, Eastman's health had declined radically. 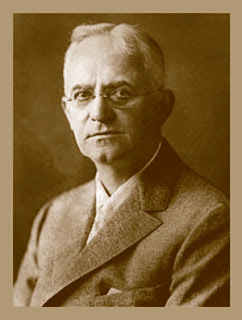