On Safari With George Eastman: Part 3 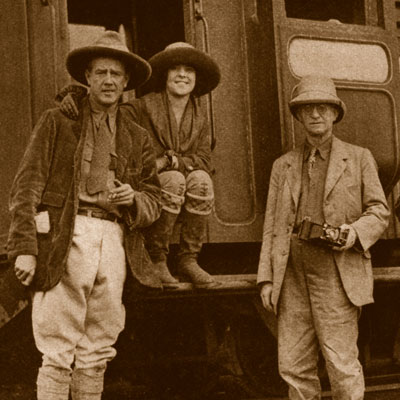 In my last posting, George Eastman and his friends Audley Stewart and Daniel Pomeroy had arrived by their private train in Nairobi.


There they joined a party of more professional explorers for a safari that would last eight months ...

... meandering through Kenya and Tanganyika. They had arrived during a prolonged rainy season, so the area around Nairobi was very muddy. While Pomeroy went with Carl Akeley to the artists' camp, George Eastman, Audley Stewart and the Johnsons went in the direction of Limuru, on sort of a trial run before they headed north to Lake Paradise. They were happy to get 20 miles by car.

This initial outing was to a camp where the Baileys (of another safari) had been about a week before. Mrs. Bailey had gone hunting without her husband (who had gone off in another direction), and she came upon two resting rhinos. When she shot at them, the rhinos charged — side by side — and one gored and partially scalped her. The attack had caused Mrs. Bailey to be tossed through the air, and then she was trampled. She was rushed to a hospital, where she recovered, and later resumed her safari! The Eastman Party came along after all the excitement, and camped in the very same spot. George Eastman later published the entire Nairobi newspaper account of Mrs. Bailey in his book.

Mr. Eastman had much in the way of supplies, but he noted that for this short expedition he brought along only two saddles, two camp tables, six chairs, hot water plates, cups with rubber separating rings, two candle lanterns, pneumatic beds, cots and bedding, a No. 12 kitchen table, an egg box and two pairs of food boxes. 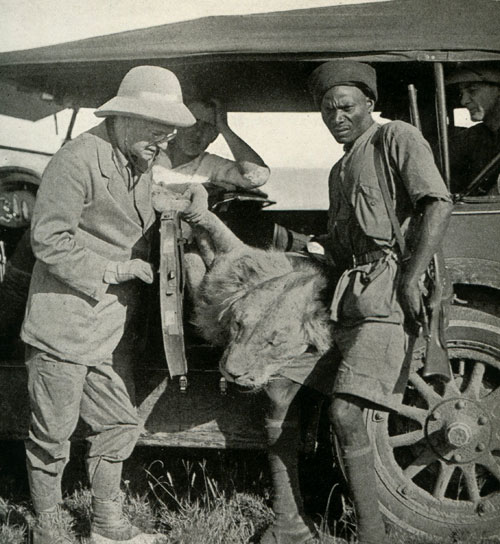 It was while at the Bailey Camp that George Eastman shot his first lion. It had been with a lioness and two cubs, and as the others ran off, the lion had stood his ground. After that kill, Eastman went after the lioness, who eluded him (apparently, orphaning cubs was not a problem for Eastman).