Pompeii No.3: Starting To Paint

As I looked at images of Pompeian-style rooms, I wanted to pick authentic colors that went beyond the typical Pompeian red and black. I also wanted a painted wainscoting, and I spent a lot of time studying the room pictured below.

I like that deep red color and how it's combined with green, and I like the illusion of panels on the wainscoting. You might be wondering which monarch occupied this room. It was designed between 1829 and 1833 by the great German architect Karl Friedrich Schinkel, and it was actually part of the Court Gardener's House, in Prussia.

The colors that I finally settled on are a nod to the Pompeian villa of P. Fannius Synistor. This particular panel can now be viewed in the Louvre. Part of my attraction to this image is the paneling delineated by fine lines of highlighting and shadow. a typical Pompeian style. I'll definitely incorporate that look.

My colors are Sherwin Williams Paints, and they break down as follows:

The colors will be combined to look like the simplified layout below. Of course there will be many layers of decoration overlaying this scheme! 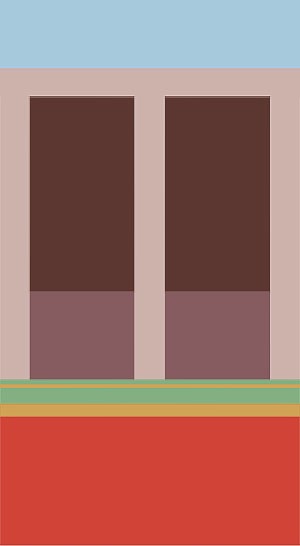 I began by determining the top edge of the wainscoting, and I drew that line with a level. Experience has taught me the hard way not to measure up from the floor, or down from the ceiling. By establishing a level line and working from that, [almost] everything will be nicely squared. 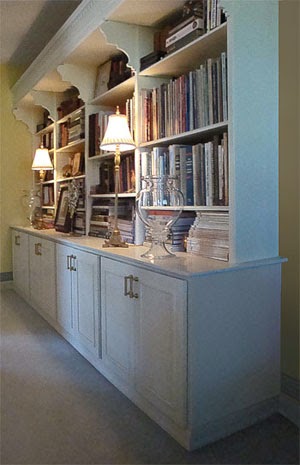 My living room has two walls of bookcases with cabinets beneath, so it makes sense to have the top edge of the wainscoting be level with the top of the cabinets. 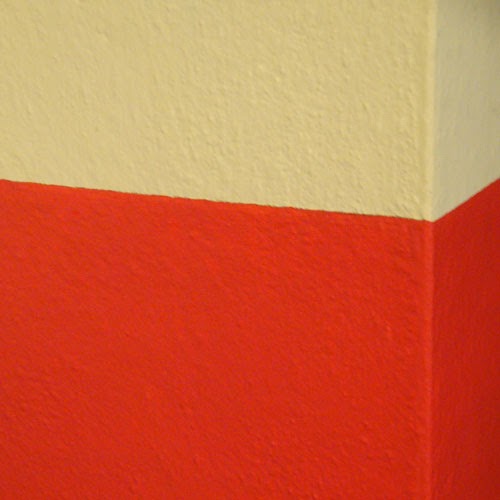 As you can see, there is some texture to the wall, but it is regular enough so that I didn't feel the need to resurface the wall. (The walls of Pompeian murals, however, were very smooth.) 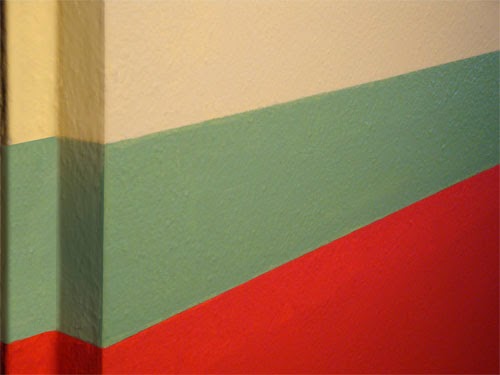 I'll have you know I painted those lines by hand! For a long time I've had an aversion to taping because the paint always seemed to bleed, or I'd pull up the paint that was already down. But after painting that green line, I realized that not using tape was an exercise in madness.

It pays to ask experts for advice, and I was directed to this green Frog Tape, which is made especially for taping rougher surfaces like stucco, concrete and brick. The only thing I did that isn't covered in the instructions was to burnish about 1/8" along the very edge of the tape. It's been working like a charm. 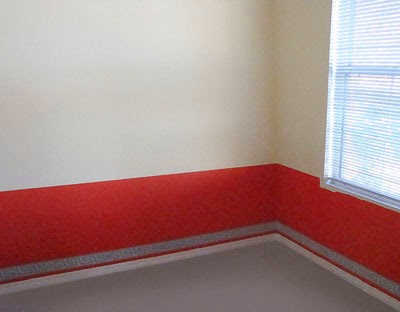 Here's a slightly blurred photo of the room at the very beginning of the project. Not to worry, I'll be showing lots of clear details as we go along.

That white baseboard doesn't look good sandwiched between the red paint and the gray carpeting, does it? If I paint it a slightly darker gray, it should look nicely tailored.

In my next posting, I'll concentrate on painting around that window. I have an idea for it that's been tucked away in my memory banks for a long time.
.