Pompeii No.1: How It Came To Be 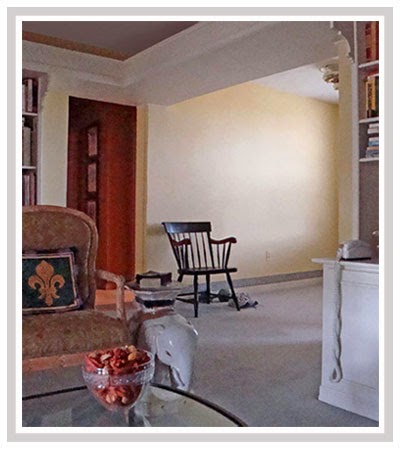 I live in a small house with a dining room merely 10x7½ feet. When I bought the house, the last owner's rather large dining table was still there, and it seemed to me as if it would almost be easier to walk across the table than around it! And because I prefer to dine out anyway, I kept the space bare, using it as a walk-through and calling it "The Great Hall."

There would be those days, though, when I'd have supper off a TV table in the living room, and ponder the empty space. It wasn't as starkly bare as it looks above — I had an antique chest of drawers against that yellow wall, and over it, a handsome collection of framed lithographs. But I'd look at the room and think, "I really should do something more creative with that space!" 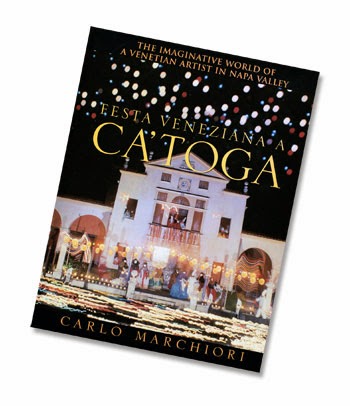 Then one birthday, my friends Sandy and Greg gave me an inspiring book, Ca'Toga, by Carlo Marchiori. Marchiori is an amazing decorative artist who found great success as a muralist. He built a splendid house in the Napa Valley, and created a magical world within it.


How's this for a living room?!

I was greatly inspired by Carlo Marchiori, not just because he's an incredibly accomplished artist, but because he also has a bold vision.

His book got me to thinking about the possibility of painting a mural in my dining room. That in itself was a bold vision for me because I usually paint on a small scale; I could easily have been the fellow painting portraits on ivory or designing bank notes.

You may have noticed that when you have a good idea — or discover something excitingly new — the Universe has a way of conspiring to remind you of it at every turn. As I pondered the possibility of a mural, my New York friend Yvonne sent me a bulletin from the Metropolitan Museum of Art. It was on the great Andrea Mantegna, who ranks as my favorite Renaissance artist.

Mantegna is probably best remembered for creating (some time between 1465 and 1474) one of the earliest trompe l'oeil masterpieces, a painted oculus for the palace of Ludovico Gonzaga of Mantua.

Here's a detail view of Ludovico Gonzaga's family and court, from a wall of the same room. Mantegna was so well respected for his work that the Gonzaga granted him armorial bearings.

I am especially enamored of a series of paintings Mantegna painted entitled, The Triumphs of Caesar. They were acquired from the Gonzaga by Charles I of England and now reside at Hampton Court. Like the others of the series, this painting measures approximately 9x9 feet.

No sooner had I digested the bulletin on Mantegna than Yvonne sent another Metropolitan Bulletin, this one on Pompeii.

The Metropolitan Museum of Art has done a wonderful favor to lovers of Antiquity by taking Pompeian frescoes that have been scattered to museums all over the world and reuniting them in virtual rooms.


Those rooms still sing out in rich and amazingly vibrant color. I look at rooms like this and find it funny that despite all our technology and sophistication, so many of us timidly cling to white and beige walls. I say, don't be afraid to experiment with color — after all ... it's only paint!!

Then I had an epiphany! As I studied all those great Pompeian frescoes, I recognized that so many of them were divided by columns into panels. And I realized that if I divided my dining room into panels in the same manner, no matter how much time I spent on the mural —or how many breaks I took from it — the mural would look finished at every stage! In my mind, I was halfway finished before I had begun!


So Pompeii it would be!

Now before we get started, I want to share some great rooms with you in the next posting, rooms that have inspired me. Some are Pompeian, some have descended from Pompeian style, and some are more generically Neoclassic. When you see them, you'll have a hint of what I had in mind.
.
Posted by Mark D. Ruffner at 7:30 AM