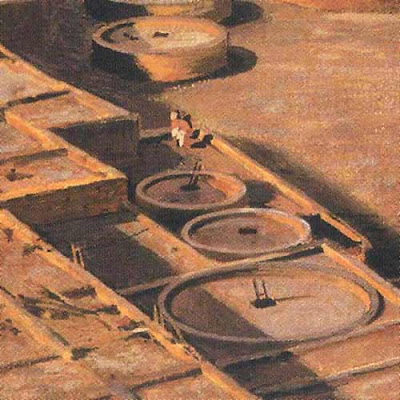 Several years ago, my nephew and I visited the center of the Anasazi culture in Chaco Canyon, New Mexico. The Anasazi were the ancestors of the Hopi and Navajo, and their name means "ancient ones." From 800-1200 A.D., the Anasazi built a most remarkable city that has the mark of modern urban planning.

There are a number of building sites in Chaco Canyon, but the primary one is a D-shaped structure known as Pueblo Bonito. Pueblo Bonito was discovered by a U. S. Army expedition in 1849, and was excavated from the 1870s into the 20th century. Above is an 1880s archeologist and an aerial view of Pueblo Bonito today. The two bottom images show the site as it would have appeared in Anasazi times.

Pueblo Bonito contained more than 600 rooms and 40 kivas (round ceremonial chambers). The Anasazi transported thousands of trees many miles for timber, they devised a sophisticated watering system, built raised plazas for ceremony and established approximately 400 miles of roads. Some roads were 30 feet wide and in straight segments for 40 miles. 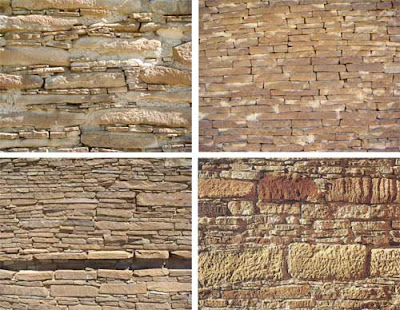 The Anasazi were great masons. These bricks may appear to be adobe, but they are all cut stone. Archeologists date different building periods by the evolving masonry styles. The bottom right example is the late period, the mid-1100s A.D. 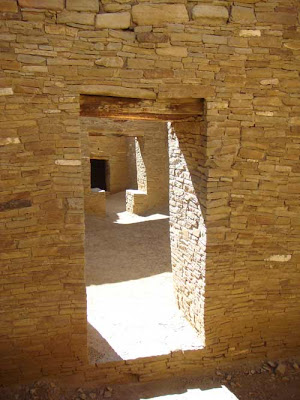 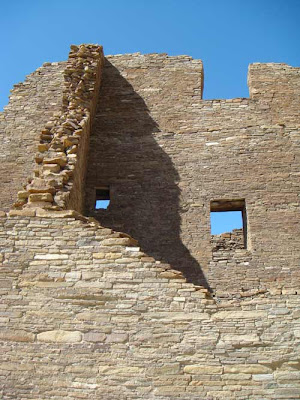 From 1921 to 1927, Neil Judd headed an archeological excavation funded by the National Geographic Society. One of his interesting discoveries was that the burial grounds were not big enough to reflect the huge population that would have inhabited Pueblo Bonito. Judd concluded that the center was not fully inhabited year round, and that there were seasonal influxes of distant tribes for ceremonies.
Those photographs not my own were taken by George H. H. Huey
and are courtesy of the Western National Parks Association.