Dating a Reward of Merit 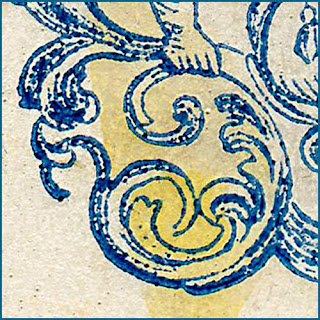 Rewards of merit, as I've mentioned before, are those delightful cards that children of the 19th century received for good scholarship. To look at their designs and verses, one can guage how much more serious (and compliant) students of 150 years ago were. 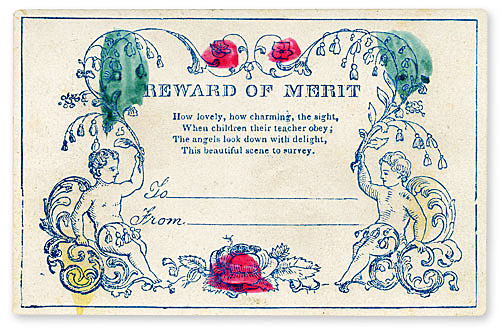 How lovely, how charming, the sight,
When children their teachers obey;
The angels look down with delight,
This beautiful scene to survey.
Judging by the design, the make of the paper — which has a clay finish — and the hand-tinting, I would date this to well before the Civil War. Indeed, it may have come from a cache some teacher retained for twenty years. But turn the reward over, and look at the back: 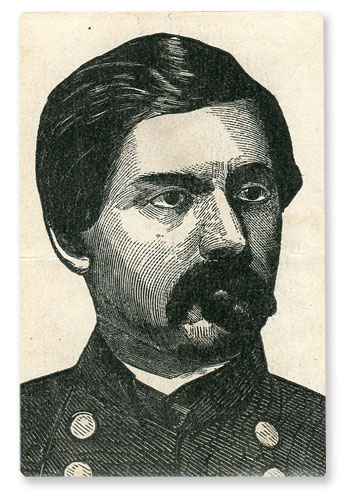 On the back, someone has pasted a portrait of General George B. McClellan, popularly known as the "Little Napoleon." It was probably clipped from a newspaper, like Harper's Weekly. 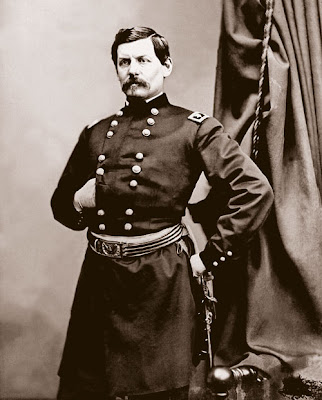 General George Brinton McClellan entered the Civil War with a sterling reputation earned during the Mexican War. And when he was appointed commander of the Army of the Potomac, McClellan was recognized as a good organizer and administrator. But he proved unready to command in battle, more interested in drilling troops than engaging in combat. After the Battle of Antietam, which Robert E. Lee lost, McClellan refused to pursue the retreating southern army, which might well have ended the Civil War years earlier. As the Army of the Potomac bogged down through his own poor leadership, McClellan blamed Lincoln and Lincoln's cabinet, then ultimately came to despise Lincoln. In 1864, McClellan resigned his commission in the Army and ran against Abraham Lincoln for President.

So while the reward of merit is of an earlier design, it probably dates between 1861, when McClellan organized the Army of the Potomac, and 1864, when McClellan was the Democratic candidate for President. My guess is 1864.

Email ThisBlogThis!Share to TwitterShare to FacebookShare to Pinterest
Labels: ephemera, George B. McClellan, rewards of merit