Coquille paper, also known as coquille board, is a thick white paper with a pebbled texture. Through the wonders of PhotoShop, I've scanned some coquille paper so that we can see its texture. 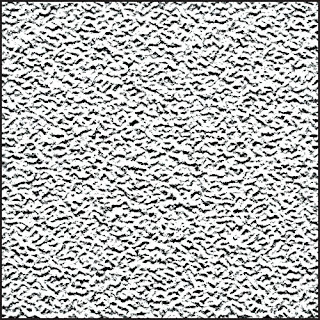 The benefit of drawing on coquille paper, aside from the fact that it provides an interesting texture, is that the pencil lead against the textured paper essentially creates its own halftone.

The above illustration, for a municipal securities company, was printed without a halftone screen, and yet it appears as a halftone.


Here's a scan of original art for the same company. If you click on the drawing to enlarge it, you can see the paper's texture. As this scan demonstrates, even though the paper forms its own halftone, the drawing could be even richer when screened. My concern would be whether the camera would see a screen of a screen and then form a moire pattern. I don't know because...  I've never tried it!
This is my favorite illustration on coquille paper. I created it for PPG Industries, which made a product that eliminated hydrogen sulfide (which has a smell we associate with rotten eggs). Hydrogen sulfide, aside from having a noxious smell, is toxic and can form sulfuric acid, which in turn will rapidly corrode concrete and metal piping. The headline for the ad said, "You don't get rid of hydrogen sulfide by covering it up."
.
Posted by Mark D. Ruffner at 4:00 AM