The premier hotel in St. Petersburg, Florida is the Vinoy. It sits on St. Petersburg's Tampa Bay waterfront, adjoining a park with royal palms, and oak and banyan trees.

Norma Dew Sleeper, a St. Petersburg resident who attended the Grand Opening, said of the evening, "It was so glittering and exciting. There were search lights casting rays in the sky just like they did at Hollywood parties, and everyone felt like a celebrity."*

The hotel attracted famous guests for decades, but went into a slow decline. By the 1970s, an overnight stay cost only about $20, and in 1974 the hotel closed.

The Vinoy then suffered from eighteen years of neglect. Teens partied in the empty ballroom, derelicts slept where they could, windows were broken, and finally the hotel was surrounded by a chain link fence and written off for demolition. I remember it in that state, and it was an eyesore.

In 1978, though, the Vinoy was placed on the National Register of Historic Places, and a succession of owners and investors spent $93-million to bring it back to its old glory. In 1992, the Vinoy reopened, as beautiful as ever.

Above, the Vinoy in ruins and below, those same views as seen today.


The entrance to the Vinoy is as Baroque as they come. Unfortunately, there's a porte cochere directly in front of it, so it can be viewed only at close range. Still, it's spectacular.

Original tilework survived, and they shine with a patina that makes them look like gold. 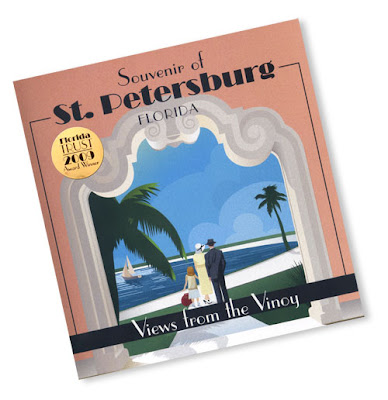 The photographs in this posting that are credited to the Historic Old Northeast Neighborhood Association, and the quotation from Norma Dew Sleeper, come from the award-winning book above, Views from the Vinoy. It's indeed a well-designed and interesting souvenir of St. Petersburg.
And if you're ever in St. Petersburg, be sure to visit the Vinoy.
.
Posted by Mark D. Ruffner at 4:00 AM