Pompeii No.13: Adding the Garlands

Many Pompeian villas had murals that featured garlands, and we must assume that for festive occasions, real garlands were hung as well. The garland above came from the house of P. Fannius Synistor, whose color scheme I've adapted to my own Pompeii Room.

According to the Metropolitan Museum of Art, where the mural fragment resides, this garland celebrates the god Bacchus. The bull's head represents a real one that would have been used as sacrifice. If you look closely you can see that a strand of pearls adorns its horns. The bearded satyr head represents a mask, a snake rises from a cista mystica, which was used in Bacchic initiation rites, and on the far right is a cymbalum, used to make Bacchic music.

In Pompeii No. 1, I mentioned that Andrea Mantegna ranks as my favorite Renaissance artist. He and many other Renaissance artists employed garlands in their paintings, doubtlessly as a nod to Ancient Greece and Rome, for to be an intellectual during the Renaissance was to be immersed in Classicism. Above is a detail from Mantegna's ceiling in Mantua's Palazzo Ducale.

Here's a detail from Mantegna's altarpiece from the Church of San Zeno, in Verona. I've chosen it as the source for my Pompeian garlands. I'll start on my wall with the center garland, under the clipeus, and I'll use the garlands that are surrounded by the white box above.

Here's what they look like enlarged. One of the things I like about Mantegna is that he brought the same eye for detail to absolutely every inch of his paintings. 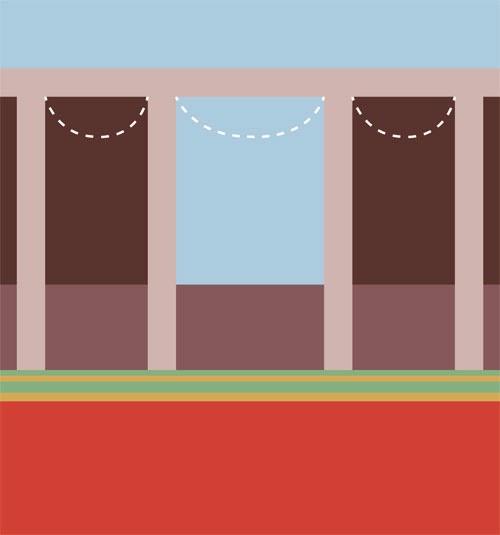 What I have to be conscious of is that the central garland will be a different shape than the others, though at the same scale and hanging depth. And if I keep the clipeus garland's foliage in scale with the other garlands, I will need to invent extra foliage to "span the gap" at its center.

I started painting my garlands in greens and reds, as Mantega had, but quickly realized that the ones with auburn backgrounds wouldn't pop out as much as I would like. As I've said before, it's only paint, and I started over. I looked at this handsome book cover, which features a 19-century French wallpaper design, and realized that it was a bolder, more effective garland for my purposes.

Here's the first garland finished. Next week, we'll take a look at the remaining garlands, also based on Mantegna designs. I hope you'll check back then!
.