Above The Door To The Inner Sanctum 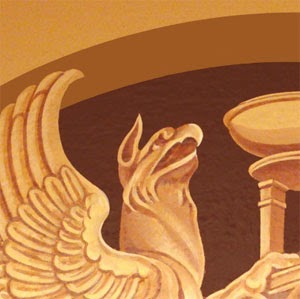 The hallway to my bedroom is a direct shot from the living room, so the bedroom door is actually very visible to my living room guests. When I was repainting the hallway, I decided to make the bedroom entrance a bigger statement.

This griffin decoration is achieved with the same Sherwin Williams paints that I used in the hallway, with acrylic paints added for some of the shading.

The original overdoor was carved in 1794 by Pehr Ljung for Regent Carl of Sweden. Carl acted as regent for his nephew from 1792-1796, and as Carl XIII of Sweden from 1809-1818. The griffin was Carl's heraldic device, and in this arrangement, griffins guard the tripod sacred to Apollo, symbolizing Carl as guardian of the arts.
.
Posted by Mark D. Ruffner at 7:30 AM