Pompeii No.50: The Right Ignudi

In Pompeii No. 49, I created an ignudi loosely based on ones by Annibale Carracci. Now it's time to create a companion piece to sit on the right side of the mural.

I've chosen to use this fellow as my basis; like the first figure, he's from the ceiling of the famous Farnese Gallery. My friend Sandy said, "You're not going to use that hair, are you!?" Oh, is it that bad? Well, perhaps he does have a bit of a bed-head.

As in my last ignudi, I will be adding new legs for a new posture.

Originally, I had thought of painting the draperies a different color from the last ignudi's, but because the two figures are somewhat unbalanced, I decided to have blue draperies on both sides of the mural.

Sometimes I have trouble capturing the right colors in a room that does not have a lot of natural light, but the colors in this shot are very true to the  painting. 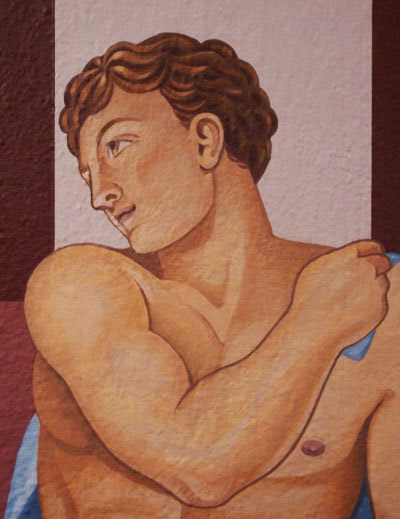 I've stylized the hair, and Sandy should be happy that it's not quite so windblown. I had fun painting the eye's reflection to match Carracci's image.

Notice that I have a different light source than the Carracci original. Mine conforms to my own mural.

The outlining was not typical of Carracci, but it was typical of Michelangelo. It's logical that I reference Michelangelo for this work, because Carracci himself did. 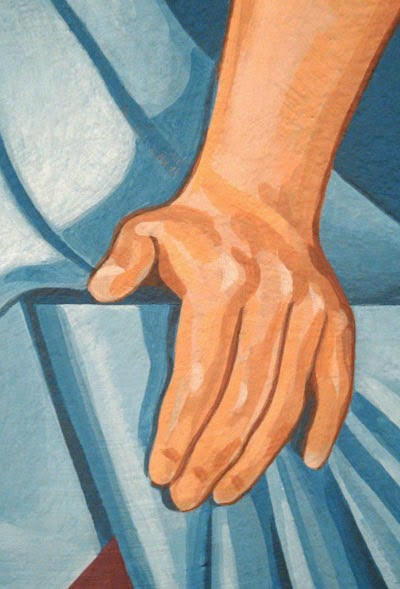 This image is a bit on the orange side, but I'm including the hand (at approximately 150% its actual size) to show that it's rather loosely painted.

In this image of the living room wall, you can see how I've endeavoured to balance the figures by balancing the draperies, particularly as they extend out to the center of the wall to exactly the same length. The drapery on the right is also gathered at the end to balance the crossed feet on the left. 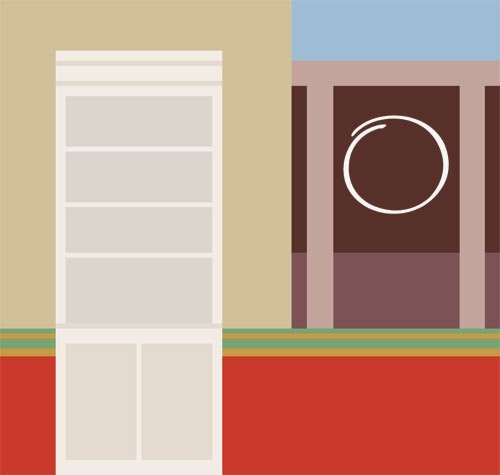 There will eventually be a neoclassic design element between the two ignudi, but the next stage of the mural will be to faithfully render a wonderful Carracci detail in the upper panel. That's coming up in the next posting.
.