The title of this posting comes from a recent National Public Radio broadcast of The Story, in which New York art restorer Dianne Dwyer Modestini described receiving a many-layered and almost cartoonish painting from an art dealer in 2005. The painting was so overworked that Modestini initially suggested that one of her students work on it, but she was finally persuaded to take on the project herself.

The subject of the painting is Jesus Christ portrayed as Salvator Mundi, which in Italian means "Saviour of the World." To merit the title, a painting must show one hand in a gesture of blessing while the other holds an orb symbolizing the world.

The one area of Salvator Mundi that was not badly obscured was the raised hand, which had the look of Leonardo da Vinci's style. As Modestini removed layers of varnish and paint, she saw that the artist had changed the position of the thumb. When an artist makes a correction to his own work such as this, it's called "pentimenti," and to Modestini it was an indication that the painting was an original work and not a copy of another painting.

As she worked removing discolored varnish around the Salvator Mundi mouth, the restorer was looking at an enlargement of the Mona Lisa's mouth. It was then that Dianne Modestini came to the realization that she was probably uncovering the first da Vinci painting to be discovered in 100 years. At that point, and before final restoration, the painting was authenticated by da Vinci scholars.

Da Vinci was known to have painted Salvator Mundi between 1490 and 1519, and by the 17th century it belonged to England's King Charles I. Charles' widow, Henrietta Maria, asked Wenceslaus Hollar to make an engraving of Leonardo's Salvator Mundi (above), and a comparison between the engraving and Modestini's project was a vital part of the authentication process.

The painting passed from King Charles II to the Duke of Buckingham by 1660, and was sold by the Duke's descendants in 1783.

The location of Salvator Mundi between 1783 and 1900 is unknown, and perhaps it was in this period that someone tampered with the painting, essentially hiding it from view.

In 1900, Frederick Cook bought the painting, and in 1958 his descendants sold it in a lot for the equivalent of $100, to a buyer named Kuntz. It was in turn sold to an American family who sold it in 2005, at which time it was brought to Modestini for restoration.

The painting is one of 16 surviving da Vinci's, and is currently valued between $100-200-million.

Today Leonardo's Salvator Mundi is owned by R. W. Chandler and is on loan to London's National Gallery, where it was displayed this year.

According to CNN, when the conservator Dianne Dwyer Modestini was finished with the restoration and parted with Salvator Mundi, she "described suffering separation anxiety and depression over losing the painting, and with it her connection to the enigmatic painter who was its author." 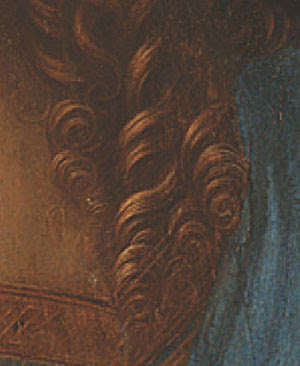