The Origin of Cigar Store Indians

Museum guides and armchair historians will sometimes tell you that the cigar store Indian was positioned outside tobacco shops for the benefit of illiterate patrons. While there's truth in that, it's not why cigar store Indians became so popular in the 19th century, and the real story is far more interesting.

It starts with ship figureheads. From the time of the 16th-century galleons, bows of ships were adorned with figureheads, and shipbuilding ports attracted ship carvers to make them. Figureheads were massive wooden sculptures, and they were a beautiful art form.

This double figurehead is on display at The Museum of America and the Sea, in Mystic Seaport, Connecticut.

On two days of the American Civil War — March 8-9, 1862 — in a naval battle at Hampton Roads, Virginia, the Confederacy attempted to break a Union blockade. The CSS Virginia (which is known more familiarly as the Merrimack) had successes the first day. On the second day, March 9, it came up against the Union's USS Monitor. It was the first time two ironclad warships engaged in battle, and though the battle was inconclusive, it forever changed naval history. Navies around the world realized that wooden ships, and particularly wooden battleships, were a thing of the past. (You can read more about the famous "Battle of the Ironclads" at Brian T. Bolten's excellent site, here.) 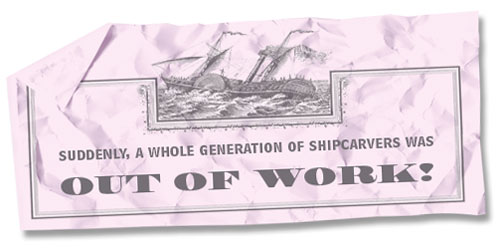 And so those ship carvers, many of them young men, scouted for and found two areas that would be appropriate for their talent.

One was carousel figures, like this equestrian horse by Daniel Muller, who is considered the greatest of the carousel carvers.

A shop of carousel carvers from around 1900 was a busy place of mass production.

The second industry that ship carvers "carved out" for themselves was that of the cigar store Indian. This handsome figure takes a place of honor in the living room of collectors of American folk art. Today, antique cigar store Indians sell in the range of $50,000. The one above probably cost a lot more because it is the work of Samuel A. Robb, who is regarded as the master of the American cigar store Indian. Recently, a carving by Robb of the English comic character, Punch, sold for $542,400.

According to Terry Kovel, by 1900 there were 100,000 cigar store Indians in use. But slowly, as that Civil War generation of ship carvers died off in the early 1900s, so did the popularity of the carousel and the cigar store Indian.


My next posting will feature my own cigar store Indian.
It was a collaboration with another artist —
a fun project and a good story!