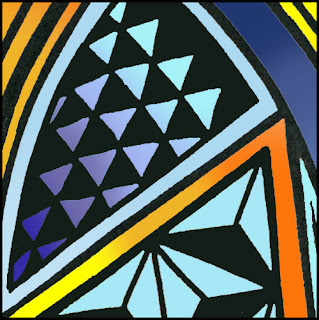 This  past weekend I gave my second talk in a year on mandalas. I talked about creating mandalas as a form of meditation in an earlier posting, which can be found here.

Saturday's talk was part of a day-long seminar on Hildegard of Bingen (1098-1179), who was a Christian mystic, Benedictine abbess, and a writer of texts on philosophy, botany and medicine. She was also a composer, a founder of two monasteries and an advisor to popes. Hildegard had an encyclopedic mind, and as a 12th-century woman, held a unique status in the Catholic church. 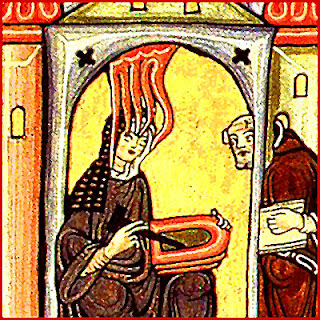 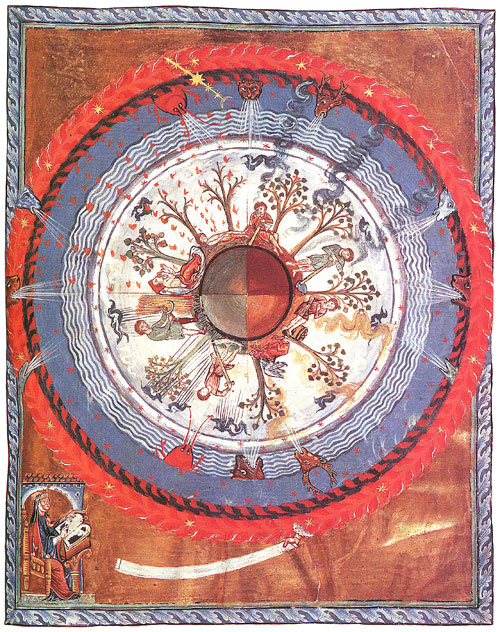 Hildegard of Bingen also created mandala illuminations as a way of interpreting and explaining her visions. I was therefore asked to talk about mandalas, which I consider tools for centering and balancing, or as graphic meditations.


At an initial stage, I approach mandalas loosely — without compasses, protractors or rulers — because I want to stay in a flow. I often use the backs of inexpensive paper plates since they're embossed with a circle, and therefore make great templates. I work relatively quickly with magic markers, and I might create six such mandalas in about an hour. If I don't like the direction of the mandala, or if I intuitively feel that it's finished, I simply pick up another paper plate.

I always start the mandala process in a meditative state, and as is often true with the creative process, I find myself going into another level of consciousness. The primary value of creating a mandala (for me) is that the process allows one to tap into a deeper self; that one can end up with an interesting or beautiful finished image is an extra reward. I liken mandala-making to the adage that the journey can be more important than the destination.

Often a mandala reveals itself to me in the process, and I discover a theme that can be powerful or seemingly mundane, but in any case a reflection of some level of my consciousness. When I completed the above mandala, I interpreted it as an immense space station, perhaps several miles wide. I enjoyed the image, it fired my imagination, and so I decided to refine it by redrawing it and then coloring it by computer.


Now my mandala is pure fantasy, but it's still a tool of balancing, centering and symbolism. The center (which for me is always the most important part of the mandala) becomes an energy source. The number three is repeated many times, and for those interested in numerology, the blue pyramids encircled by orange (their complementary color) add up to 12 sides. As I recognize the symbolism that I've created subconsciously, I want to continue to reinterpret at a conscious level.


So I begin, on the computer, to create the next level of mandala. What you see above is just one layer of a mandala that will have several layers, each a mandala unto itself. But I offer this early stage as an interesting viewing exercise. Stare at it over time and it will vibrate, become 3-dimensional and draw you in.
.
Posted by Mark D. Ruffner at 4:00 AM

Email ThisBlogThis!Share to TwitterShare to FacebookShare to Pinterest
Labels: Hildegard of Bingen, mandalas