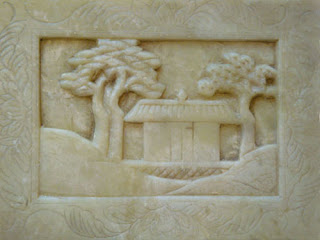 When I was much younger, I had a lovely 90-year-old neighbor named Ruth, with whom I became friendly. We visited often and had long conversations, and one day Ruth gave me a small stone box. She said it was jade. 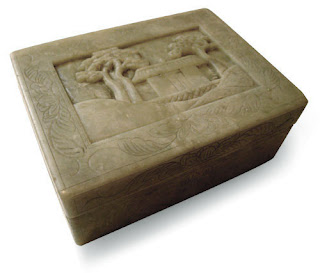 I commented that it must have an interesting story, and Ruth — who had been a teacher — said that it had been given to her "fifty or sixty years ago" by a dean at her school (I remember thinking at the time how interesting that at Ruth's age, whole decades were merging together into single blocks of time.).

That same year, I traveled to Scottsbluff, Nebraska for a Thanksgiving family reunion. On Thanksgiving Day, the weather was unusually balmy, and so the family decided to hike up a mountain in a nearby state park. The Oregon Trail cut through the mountain, and one memorable detail was that one could still see the ruts made from pioneers' Conestoga wagons. 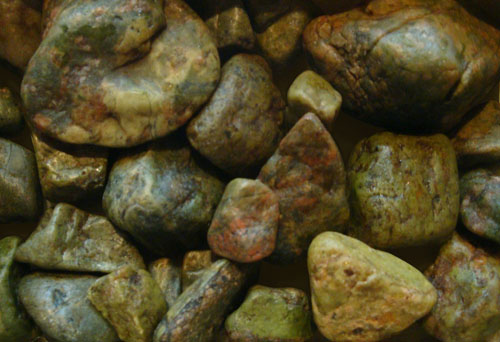 As we walked up the gravel path, I started noticing handsome green stones interspersed here and there. My brother told me that they were probably Wyoming Jade, and that enchanted me all the more. I told my young niece and nephew that I'd pay a dime for each gem that they'd find, and soon the three of us were engrossed in a fun treasure hunt.

I've since discovered that "Wyoming Jade" is actually a misnomer, and that the green pebbles are a lesser grade of the jade family, called "nephrite." But I still like to think of collecting jade treasure on Thanksgiving Day, and today the pebbles live quite appropriately in Ruth's box. 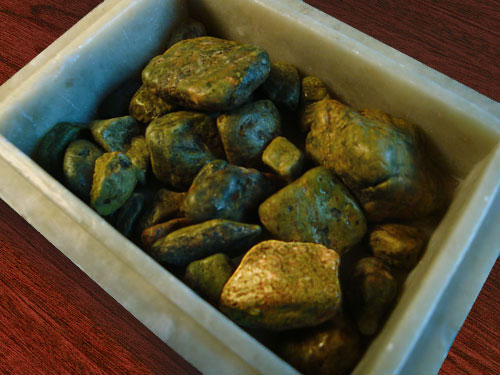 To all my blogging friends, Happy Thanksgiving!