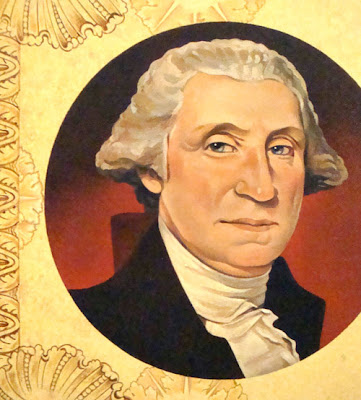 I recently finished a painting that includes a portrait of George Washington.

In order to achieve his likeness convincingly, I assembled three portraits by Gilbert Stuart, and studied and compared them. What I found interesting is how different they appear, and yet how similarly they were painted.

These three portraits by Stuart are each recognizable as George Washington, and yet they feel distinctly different. It’s as though they each reveal a subtly different personality trait in Washington, or at least a different mood.

In studying these images, one has to appreciate that Stuart made his living by painting portraits, and that while Washington's portrait was in high demand, the president had posed only twice for Stuart. Therefore Stuart was busily making copies of his own copies. There was no Washington sitting in front of him and of course, nothing like photographic reference. His own work was the primary reference.

Now compare these eyes from the three portraits. They’re all Washington’s left eye, the right eye as we face the portrait. One can see, especially in the first two eyes, that Stuart was trying to duplicate the likeness, stroke by stroke. 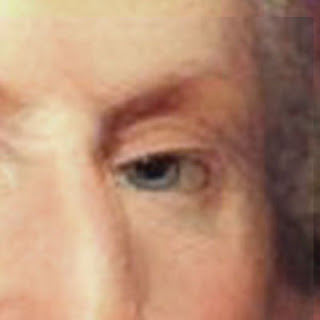 In this image, I’ve superimposed all three faces. While the noses are slightly off-register, the eyes align perfectly. I conclude that Gilbert Stuart used some method of tracing his copies, and I think that the varying moods of Washington’s portraits were never a primary intention. Instead, I think Stuart was focused on simply trying to duplicate, for the umpteenth time, an accurate likeness.
Posted by Mark D. Ruffner at 7:00 AM