In my last post, I showed a sample of Asher B. Durand's banknote engraving. In the top middle of that specimen sheet, you'll see a rosette. It's an example of guilloche, which is the wonderful pattern of parallel intertwined lines that we all associate with currency security. 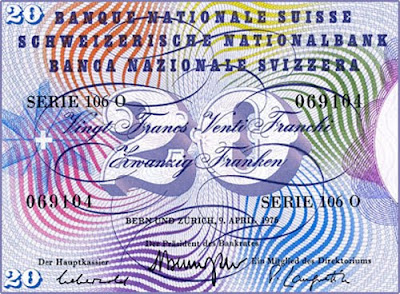 This is a detail of a Swiss banknote from the 1970s. Isn't it wonderful? Designers of European currency positively exult in guilloche. 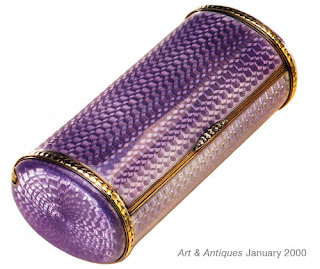 Now, here's a different kind of guilloche. The term also applies to the engraving of the pattern on metal, usually then enameled in the style of Peter Carl Fabergé. In fact, the word comes from Guillot, the engineer who invented the guilloche engraving machine. 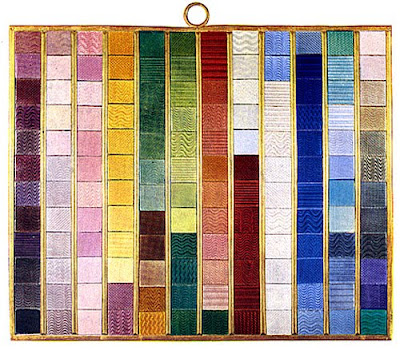 When his wealthy patrons would commission an enameled piece from Fabergé, he would show them this chart of guilloche chips, to help them make decisions. Imagine the delight of such choices! This is an illustration from The Art of Carl Fabergé, by A. Kenneth Snowman. While writing his excellent book sixty years ago, Snowman corresponded with and interviewed Fabergé's sons, and also surviving Fabergé craftsmen. 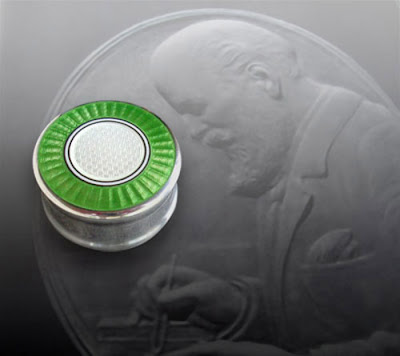 This is a pillbox from my own collection. I bought it while I was in high school, and shortly after reading Snowman's book. When I saw this in an antique shop, I realized that it was a fine design and probably as close as I'd get to owning a Fabergé creation. I based that not just on the flawless enameling, but also because the lid is seamless. If you study Fabergé's work, you'll find that he excelled at hiding hinges and clasps. Many of his eggs opened with the press of a jeweled button. Here, I've placed the pillbox on top of a portrait of Fabergé, though in fact the box is English silver.

And finally, for my architect friends, guilloche also refers to this particular design of intertwined ribbons, which is often found in Greek and Roman architectural detailing.
Posted by Mark D. Ruffner at 7:00 AM