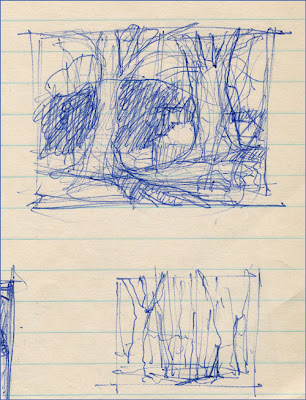 Today my topic is thumbnails, sketches and doodles — how they're different, and what purposes they serve.

As the name implies, the thumbnail is a drawing in a very small rectangle, usually 1-3 inches in measurement. Making a thumbnail is a visual way to sort out and solidify ideas or layouts that are still in a rough planning stage. The thumbnails above are by my father, who enjoyed painting winter landscapes. One can see that he was positioning trees and considering including a house in the background. In the upper thumbnail, his attention focused on the foreground, where light and shadows would define massive roots. A very simple drawing, and yet lots of ideas swirling around. 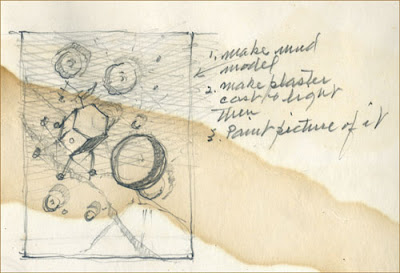 Again, a thumbnail by my father, who was obviously enjoying a cup of coffee! Here the thumbnail serves the purpose of being a reminder. It's a visual memo for painting a moon landing by first making a three-dimensional model. In this case, the thumbnail isn't about layout, it's about retaining a fleeting thought that might be developed later. 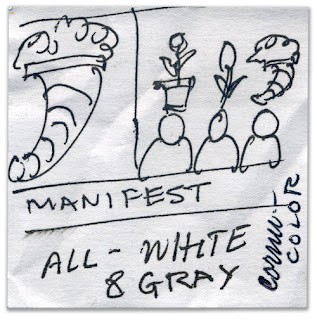 I do such thumbnails all the time, like this one on a sticky note. Stick figures are okay because the sole purpose here is to simply jog the memory. Many artists carry sketch books that they use not only for recording what they see, but also as a catalog of ideas. 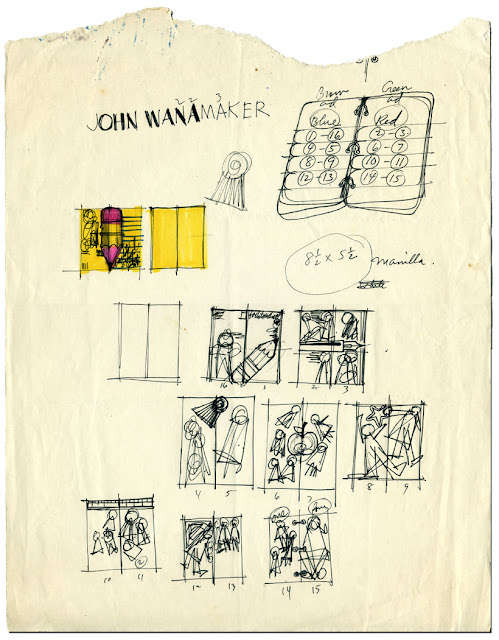 This is a most remarkable series of thumbnails. I salvaged this sheet from my first employer, Wayne Dale, who was both an adept businessman and a good graphic designer. He was responsible for designing Wanamaker gift catalogs in the 1970s, and I learned a lot from him. In this series of small thumbnails, Mr. Dale planned the catalog size, cover design, colors, number of pages, and the designs for each back-to-school spread. This is thumbnails at their best! 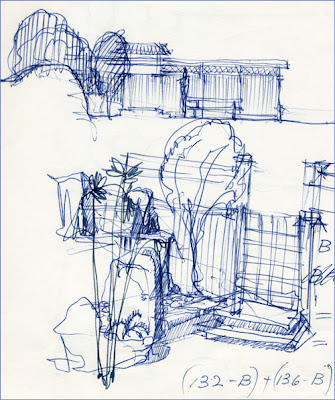 Sketches are bigger than thumbnails, and whether they are rough or comp (comprehensive), they're more refined. When dealing with a client, one might show thumbnails (but only in an initial, more casual conversation), 5 or 6 rough sketches, and 1 or 2 comps. I divide jobs into levels of presentation or completion and bill at each stage. The sketches above were by my father, who was planning his own Japanese garden. 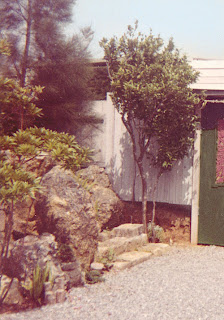 And here is that garden realized. You can see from how closely the photo resembles the sketch, that the sketch was much more advanced than a thumbnail. 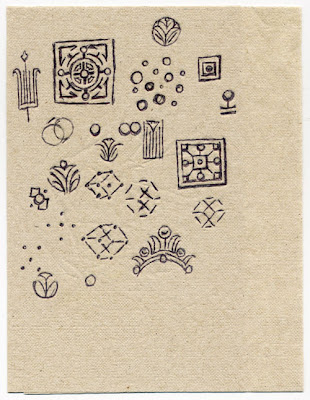 And finally, we come to doodles. Doodles are unconscious drawings, a way of zoning out and mining the subconscious. I made these doodles on a napkin one evening while I was dining alone and waiting for my meal. I have no idea what I was thinking because I was not in a conscious state. And yet our subconscious is a tremendous repository of all our observations, and a treasure trove for new projects. In this case, through doodling, I observed that the classic diagram for a box becomes two stacked Xs and a diamond, perhaps a future logo design.

One interesting thing about doodling is that studies have shown that people who doodle during speeches, meetings or classes actually retain information better. For an article about that, go here.
.
Posted by Mark D. Ruffner at 6:20 AM