Maxfield Parrish (1870-1966) was an American illustrator known for his paintings of vibrant, lustrous colors, usually incorporating a beautiful blue that was named after him — Parrish blue. He worked by glazing, which means that he built up layers of oil color separated by layers of varnish. If you ever see a Maxfield Parrish painting in person, you'll be struck by its luminosity and truly jeweled tones.


If you have any involvement with printing, you also know that images are separated into four plates of color — yellow, magenta, cyan and black, and then printed in that same order.

While Parrish did not apply glazes in that color order, this is nonetheless very much the way he approached building up the colors of his paintings.

Above is a painting discovered unfinished at the time of Maxfield Parrish's death (he was in the process of reworking it). It shows how he glazed by first using a white or neutral background and the predominant color of an element, usually blue. He would then build upon this first stage by adding additional colors and therefore depth. We can see that the foreground tree started out the same way as the blue background one, and that a non-opaque layer of magenta was added to the shadow, forming a dark, rich purple.

Parrish's method of working also shows that his primary interest was light and shadow, and in that area, he was particularly a master.

For those who are interested in glazing techniques, the definitive book on Maxfield Parrish is by Coy Ludwig, who explains in great detail Parrish's methods of working. 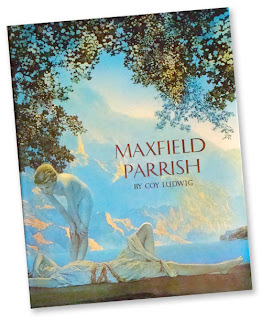