The World of Sir John Soane 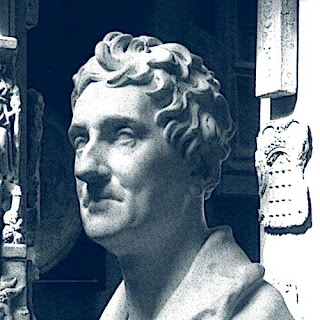 My favorite architect, as well as one of my favorite interior designers, is Sir John Soane (1753-1837). He was designing buildings at the same time as Thomas Jefferson, yet to study his work, you would guess that he had lived much later. In fact, I think that Soane should be recognized as the father of Art Deco. 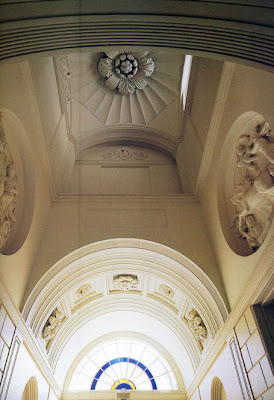 This is a hallway of Soane's country estate, Pitzhanger Manor. As one studies his interiors (and exteriors, too), one can see that Soane constantly bent the rules of proportion and always succeeded in ways that were elegant and timeless. He was especially prone to enlarge details in small spaces, much the way an interior designer knows to strategically place a large piece of furniture to make a small room appear larger. 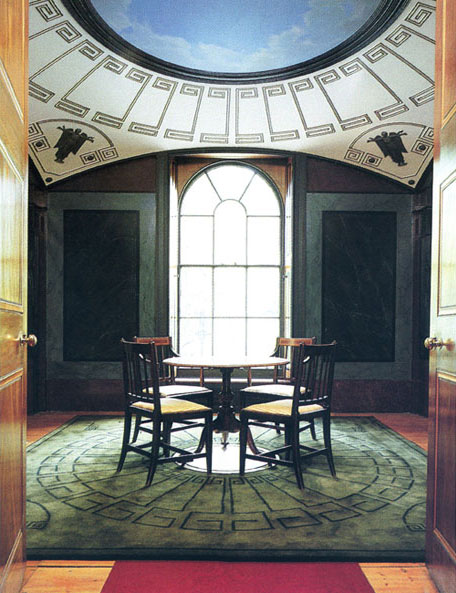 Here are views of the breakfast room and library of Pitzhanger Manor. Wouldn't you love to start your day in either of these rooms? Both rooms display Soane's signature low-domed ceiling. The breakfast room's ceiling is pure Art Deco, though it dates to 1800-1804. Note that in both rooms the ceiling and carpet designs mirror each other.

There was another aspect of Sir John that makes him very interesting, and that was his eccentric collection of architectural fragments. He was probably the first major architect to recognize the importance of salvaging architectural detail, and he filled his house to the brim with it. Soane was doubtlessly inspired by the incredible etchings of Giovanni Battista Piranesi — they knew each other and Soane collected Piranesi's work. 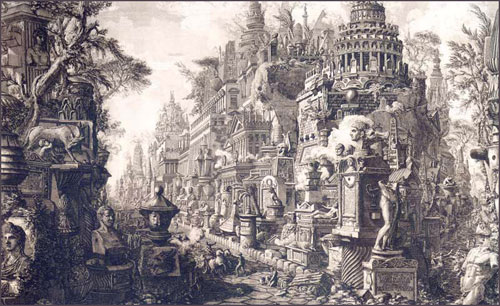 Soane expected his two sons to follow in his footsteps, and one would infer from a cursory reading of his life that he was both demanding and harsh. They repaid him with ingratitude and hatefulness. So Sir John decided, at some point after his sons were grown, that he would move his place of residence to London, build a wonderful house there for his collections, and leave it as a museum. 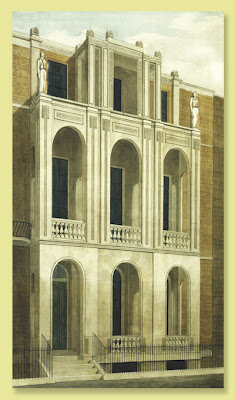 That house is 13 Lincoln's Inn Fields, and if there is one place in London I'd love to visit, this is it. Fortunately for me (and you), there's a very fine book by Tim Knox (photography by Derry Moore) recently published by Merrel, called Sir John Soane's Museum London. 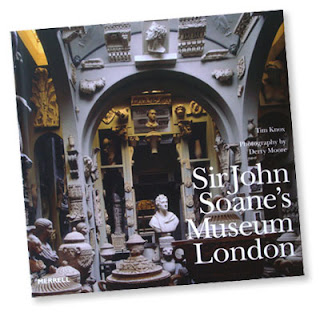 It's a very good history of the man who transformed Classical architecture, and it has exciting views of Soane's interiors. 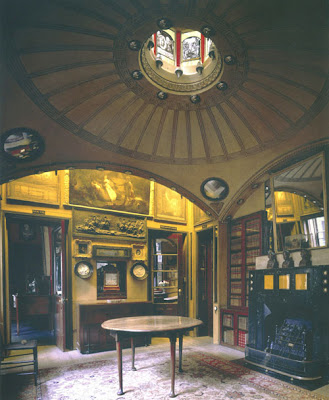 Besides his domed ceilings, Soane had other signature touches, and this parlor displays two of them — indirect lighting and lots of mirroring. The room has a skylight in the dome, but also an indirect skylight with stained glass. In each of the four corners of the dome is a convex mirror, and surrounding the skylight are eight smaller convex mirrors. Mirrors are on the doors, mounted on the wall, and of course we have only a partial view of the room. 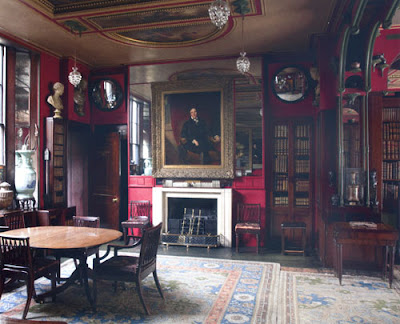 This room, which is where Soane would receive clients, again has convex mirrors, and mirrors gracing the over-mantle, window jambs, doors, even the room divider. Note the mantle, which is as modern as modern can be. 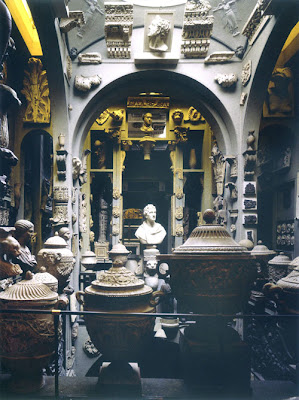 But mostly Knox and Moore treat us to Soane's astounding collection of architectural detail which so densely covers the interior walls, one wonders why the place hasn't simply imploded.

I feel a certain passion for Sir John Soane's work, and I imagined that I might be pretty high up on the list of fans. Then I read the October 2010 issue of The World of INTERIORS. It features an article on James Perkins, who lives in Oxfordshire, England. Perkins fell in love with Soane's work, started collecting plaster casts as a teenager, and now has filled his house with a collection of about 4,500 pieces.

The Fates smile upon people like James. His house was remodeled in the 1800s by ... Sir John Soane.