Pompeii No.54: Adding a Brown Anole 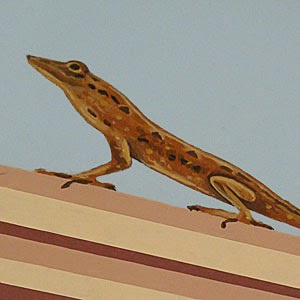 I thought that for the next stage of the mural, I would add a touch of Florida, which is where I'm located. And what better than the brown anole, which is more familiarly called the gecko.

This remarkable photograph of a green anole eating its nemesis comes by way of Timothy Mitchell's blog, which can be found here. The scene is usually reversed.

And so, because I associate the Cuban anole rather than the green anole with my environment, I have placed him at the top of my Carracci wall. A lamp is below this image, so in real life the anole would be in the very same spot, waiting for a morsel to happen by.

In my next posting I'll add one more element to the living room wall, then I'll pull back to reveal that part of the mural, completed. I hope you'll join me then!
.
Posted by Mark D. Ruffner at 7:30 AM 16 comments 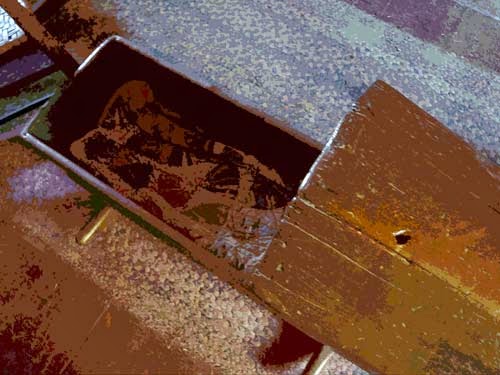 Gina of Ginaceramics and Jim of Road to Parnassus got it correct, and Rosemary of Where Five Valleys Meet got it exactly correct. (And I need to devise a more difficult quiz for you smarties!)

The purpose of the hole was for inserting a knotted rope. The cradle would be next to the parents' bed, and when the baby started crying at night, the mother could tug on the rope and rock the cradle without having to get out of bed.


With tomorrow's posting, I'll be resuming
the progress of the Pompeii Room.
.
Posted by Mark D. Ruffner at 7:30 AM 8 comments

This past week, I visited Asheville and the Smokey Mountains of North Carolina. I spent time with good friends, enjoyed the Asheville sights and savored the cool mountain air — a welcome change of pace from Florida's humidity. When Sandy and I left Asheville, the morning temperature was 41 degrees.

Before I continue with today's story, I'd like to share this panoramic view that I patched together from four separate photographs. (Incidentally, the trick to making panoramic views — whether manually, as I did, or with a PhotoShop feature — is to overlap the photographs by approximately 25%.)

Bill, our gracious host, took Sandy and me to see the birthplace of Zebulon B. Vance, the Confederate Civil War governor of North Carolina, and afterwards, its senator. The image above shows — from left to right — the smoke house, the loom house, the main house and the tool house. There are other outbuildings as well.

In his time, Vance was especially noted for his colorful oratory, and he initially reflected the neutral view of North Carolinians, who didn't want to enter the Civil War. Today he is still admired for having been an effective governor and senator, though he has many detractors as well, for he was a founding klansman. A monument to him in Asheville is being restored, and apparently not everyone is thrilled.

Putting that aside, the Vance house, built by Zebulon's grandfather in the 1790s, is a fascinating peek into the frontier life of 1800. As Americans pushed westward, the average house of the time was just one room, usually about 15 feet square. It would have had one door and perhaps two tiny windows. By contrast, the Vance house had five rooms in two stories, indicating considerable wealth. Above and below are views of the front room, which served as a kitchen and dining room.


The second room on the ground floor was a sitting room with a bed for the adults. Beyond it was a very small bedroom that was reserved for guests.

Upstairs were two bedrooms for the children, one for the boys and one for the girls. The children would share beds, but the right side of this photo shows a smaller single bed for one of Zebulon's brothers, who was sickly.

The Vance house retains its original fireplace and mantle, but it was mostly reconstructed to accurately match early photographs, using old buildings from other sites for material. The door to one of the outbuildings has this faint hex sign. That suggests that it came from a Pennsylvania Dutch house, which would have used the hex sign on a door as a blessing.

And now I'm going to end with a little quiz. In the above photograph, we're looking down at a cradle. Can you tell me why it has a hole in its top? If you guess correctly, I'll withhold your comment until it's time to reveal the answer, on Friday.

Off For a Long Weekend

I'm taking a short break to visit Asheville, North Carolina and the beautiful Smokey Mountains, but I'll be back sharing with you next week. In the meantime, have a great weekend . . . 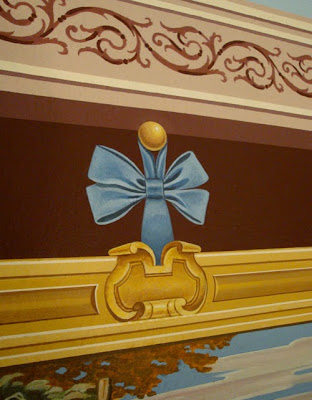 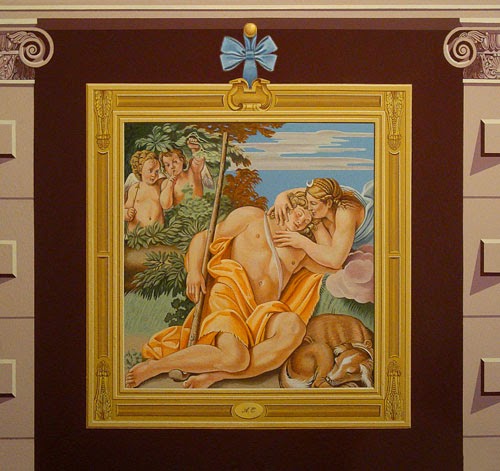 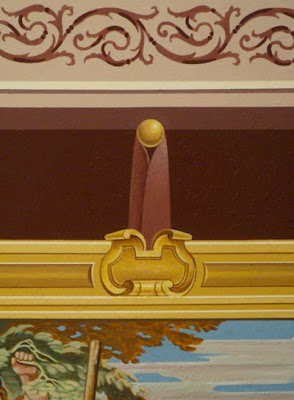 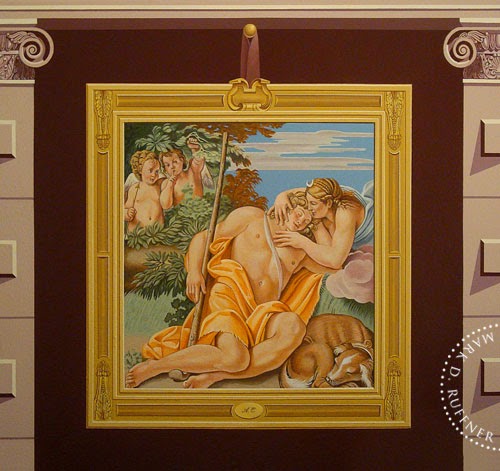 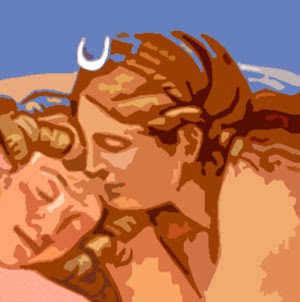 After I finished Diana's portrait, I knew that it should be complemented with an appropriate antique frame, and I did quite a bit of research on that subject. In my meanderings, I came upon the work of Giulio Clovio, an artist and advisor to Cardinal Farnese for some 40 years.

Clovio spent nine years producing the Farnese Hours, a book containing what is considered by many to be the Italian Renaissance's finest miniatures.


It was Clovio's magnum opus.

Giulio Clovis became a close friend of El Greco, who painted this portrait of Clovio with his famous book.

I was tickled that a painting from the Palazzo Farnese should be married to a frame that is also a part of the Farnese history, a nice bit of serendipity. As you can see, I modified my frame to look a tad more Neoclassic and a little less Baroque. 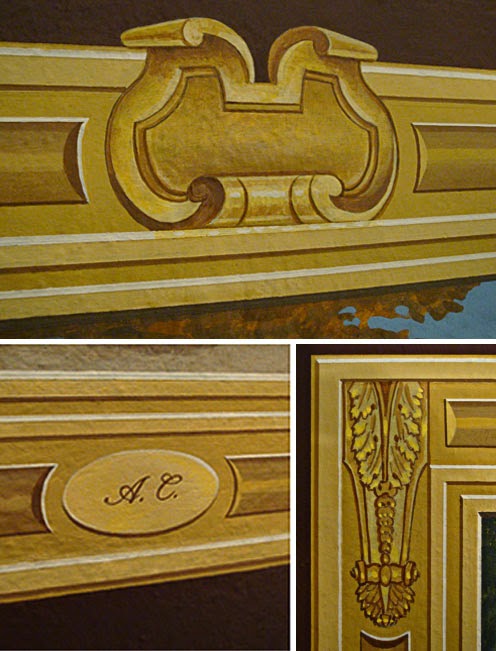 At the bottom of the frame, I've added a plaque with Annibale Carracci's initials. Wherever he is, I hope he's happy.


In my next posting, we'll figure out a way to hang the painting.
I hope you'll join me then.
.
Posted by Mark D. Ruffner at 7:30 AM 10 comments