Pompeii No. 59: The Roman Grille 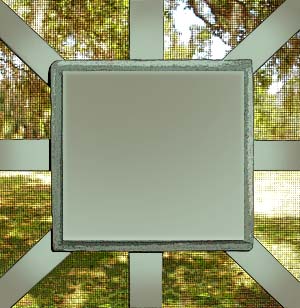 When I said good-bye to blogging exactly 20 months ago, I said that I'd continue to give occasional updates on the progress of the Pompeii Room. And so it's time to do that today!

You may remenber that I wanted to replace unsightly venetian blinds with the sort of bronze grille that would have been familiar to well-healed Romans. Then a most serendipitous event occured! As I was in the process of designing the grilles, an antique room divider showed up in a nearby gift shop.

When the room divider was separated into three screens, they were a near-perfect fit by width (as shown above), and would fit equally well in length with a little adjustment. Each screen would require cutting one design unit from its bottom. 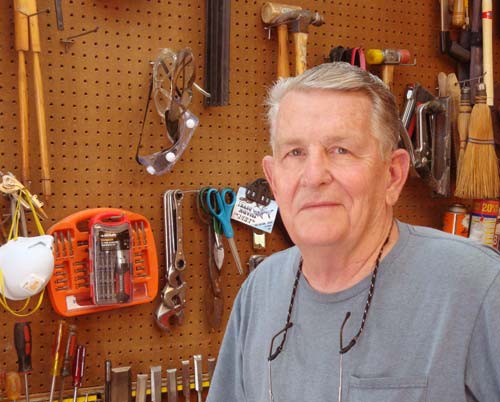 That's when my brother Cliff came on board, excited by the vision, and offering to help with the use of his beautiful shop and carpentry abilities. His contribution to the completion of the Pompeii Room has been huge!


Below are images of the screens getting cut and assembled to a new length. 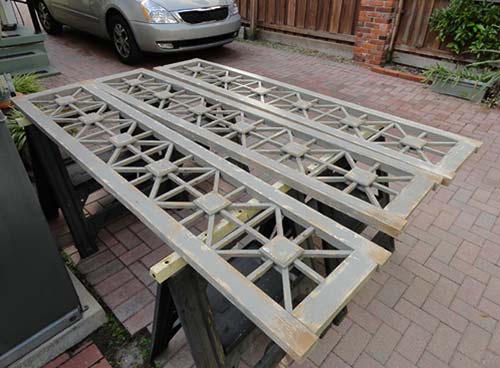 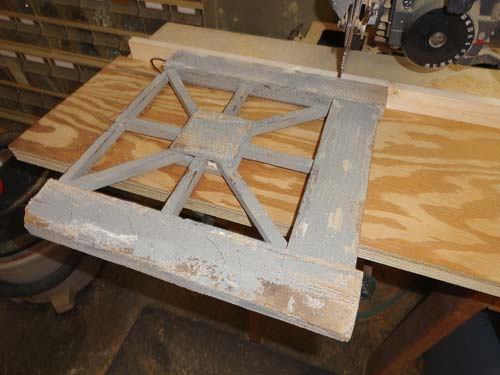 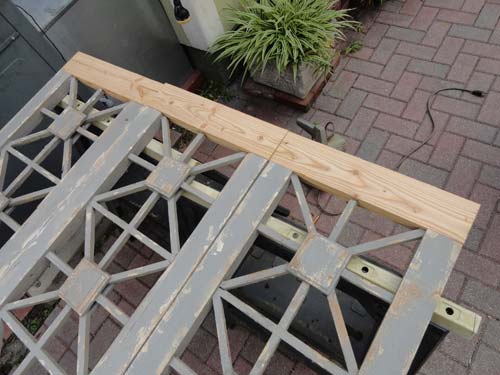 It certainly looks as though these screens went through a lot of wear and tear! Below, Cliff is filling some cracks and holes with epoxy.

Now it was my turn to get to work. Because I wanted to suggest bronze metal, I took several months caulking, spackling and sanding every surface for a smooth look. (Cliff wondered whether it wouldn't have been easier to build the grille from scratch, but I was very attached to the fact that a found object had appeared at just the right time.) 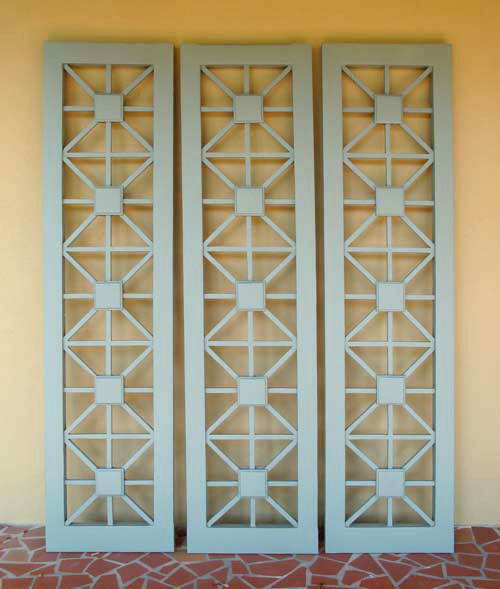 As you can see in the previous images, the five intersected squares are doubled on the reverse side of the screens. That meant that painting so many nooks and crannies would be tedious and time-consuming. I solved that challenge by finding a bronze-colored spray paint for those areas, and then having Sherwin-Williams match the spray paint for the rest of the job.

We spaced the screens by creating pseudo-hinges from an old broomstick. It's interesting to note that a broomstick has a harder grain than regular store-bought dowels.

Here is the Pommpeii Room as it appears today.
A very special thanks to Cliff,
and as always, thank you for watching. 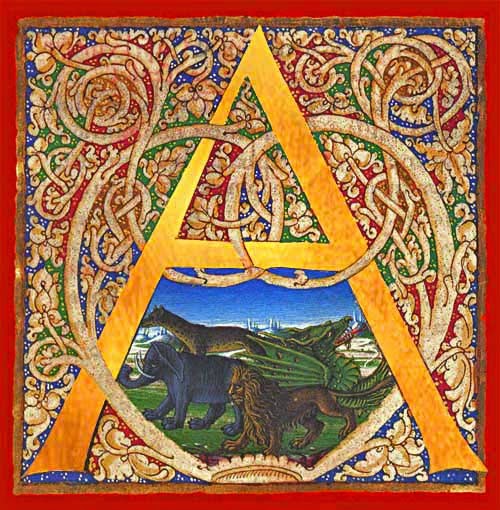 Today marks the 5th anniversary of All Things Ruffnerian, and my 416th posting. I hope you've enjoyed my subject matter, and my graphics as well. 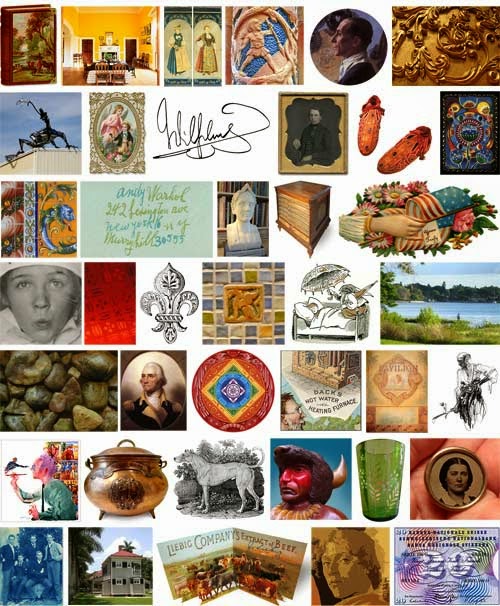 We've covered a lot of territory together these past five years, haven't we? 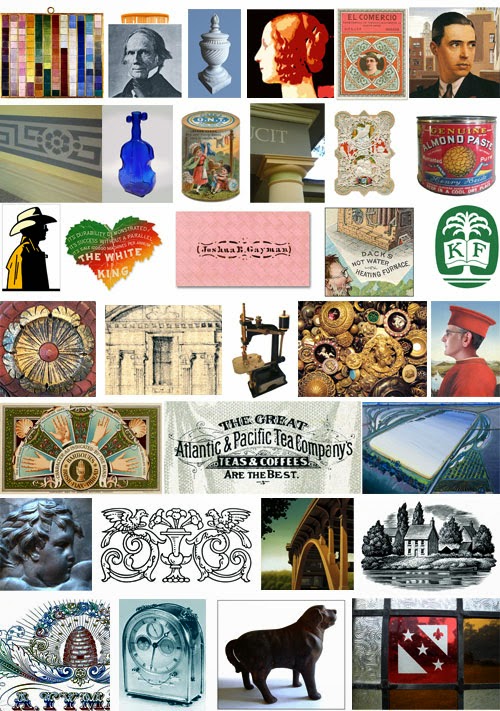 I've especially enjoyed sharing the creation of my Pompeian Room with you. Your interest and encouragement in the project has brought me as much pleasure as the project itself. Indeed, you were a great part of the process. 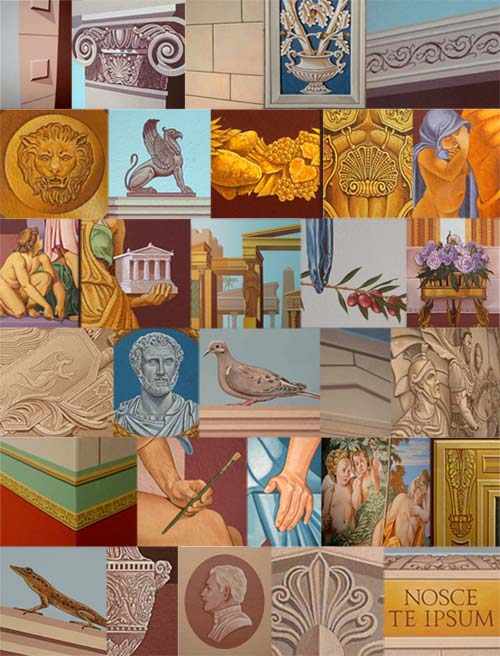 I hope in your own lives you are surrounded by all those things that bring you joy and have meaning for you. After all, to have passion for something, whether it be a mighty idea or the tiniest of objects, is to be that much more alive.

This is my last posting. It's time for me to go in a different direction and to focus attention there. 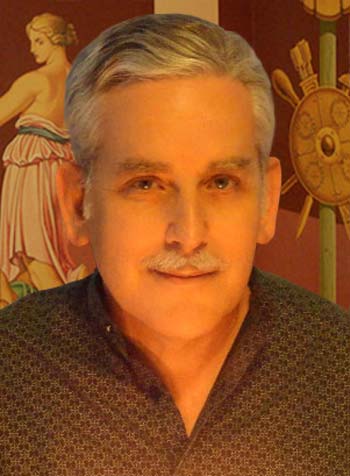 I want to thank my readers and especially a dozen+ friends who have been consistent commentors and who have shared regularly of themselves, often outside of this blog. You know who you are because you're each on my blog list. I'll continue to visit your blogs and to comment from time to time, and so this will not be a good-bye, but only "adieu."

This 1859 map of Pittsburgh, Pennsylvania shows how the Allegheny River (at the top) joins the Monongahela River (on the bottom) to form the head of the Ohio River. This point was valued even in America's colonial days as strategic for both trade and military defense, and today it is often referred to as "The Golden Triangle."

When the French established Fort Duquesne on the triangular spit in 1754, the British sent troops led by 21-year-old Major George Washington to serve an ultimatum and retake the land. Washington was defeated by the French, as was General Edward Braddock, in 1755.

These were early battles of what became known as the French and Indian War (1754-1763), so called because Native Americans sided with the French.

The French eventually retreated from Fort Duquesne, burning it to the ground as they left. The English, led by General John Forbes, reclaimed the point and Forbes named the area around it "Pittsburgh," in honor of William Pitt the Elder, the Prime Minister.

George Washington, who surveyed more of the United States than most Americans realize, surveyed much of the land in the vicinity of Fort Pitt with the aim of parceling it to French and Indian War veterans.

Now, you would think that with a history like that, the Point — as it became known — would be prized and preserved. But that was not the case. By the mid-1800s, the area was an industrial site. The 1908 photograph above shows that there was a huge logging trade along the Monongahela, and that the heavy industry of the city was already establishing Pittsburgh as a notoriously smoggy, dirty place. In fact, well into the 1940s and 50s, Pittsburgh was so dark with smog that it was not unusual for streetlights to burn throughout the day, and for traffic police to wear masks.

This 1948 view shows railroad tracks leading to the Point and water in which one wouldn't want to swim.

Then in 1945, Pittsburgh elected Democratic Mayor David L. Lawrence, a remarkable man. Over the course of four consecutive terms, he forged alliances with Democrats, Republicans, bankers and industrialists, and through his own vision and determination created an urban renewal that the people of Pittsburgh called "The Renaissance." It took more than two decades of work, but today the Point looks as you see it below.


My very first job was in "Gateway Center," and I looked out from a window where there's a red "X." By that time, Pittsburgh was working hard to clean its sources of pollution, though people who hadn't actually visited there still referred to it as "the Smokey City." Eventually Pittsburgh's steel industry died (the tallest building in this photograph is the U. S. Steel Tower), and Pittsburgh became a center for computer technology.


Today one can visit Point State Park and walk along inset granite markers that delineate the foundation of Fort Duquesne. Then at the very tip of the triangle is a basin with a 150-foot (46 m) fountain.

The interesting thing about that fountain is that it's fed by a fourth, subterranean river that runs approximately 54 feet below the city. Water is pumped up from the river, which is a remnant of ancient glacial flows.

If you're familiar with this 1986 portrait of H. M. Queen Elizabeth II, you've had a fine sampling of the work of Michael Leonard.

The portrait — now permanently displayed in the National Portrait Gallery, London — was a 1985 commission from Reader's Digest to honor the Queen's 60th birthday. It shows the Queen posed with her corgi Spark.

Michael Leonard was born in India in 1933, to British parents. He returned to England to complete his education, and then his military service, and then he studied commercial art and illustration at St. Martin's School of Art in London.

Though he spent many years working successfully as a commercial artist, he yearned to be a painter, and as he says, "make pictures for the wall rather than the page."

Early paintings tended to be muted, possibly as a reaction to the vibrancy of the commercial work he'd done.

I really like how dynamic these compositions are,
especially the one below of Frederick Georg Junger.

Through the years, Michael Leonard has created what he calls "Portraits in Time." They're inspired by that interesting phenomenon whereby we recognize (at least I do) that some people look as though they could fit into another place and time. Here are some delightful examples:

The Portraits in Time that I've showcased here span from 1984-2003. Below is a Michael Leonard self-portrait (also a Portrait in Time). Click on his portrait, and you'll be linked to his website.

The comment below from my blogging friend Jim, of The Road to Parnassus, reminded me of Horizon Magazine's different take on Portraits in Time. Back in the 1950s or early 1960s, Horizon contrasted ancient sculptures to celebrities of the time. I was fortunate to find a few of those marvelous comparisons.

I saw this great balustrade design on Pinterest, and it reminded me that I've been collecting my own photographs of cut-out Florida fences. I think I've accumulated enough to share now.

I pass this fence at least once a week. It's on an old part of St. Pete Beach known as Pass-A-Grille, Florida. The house is pretty neat, too.


Here's the gate. The fish in Florida are always smiling.

These fish are swimming in a school.

The simplest of white picket fences can be transformed by making only three diagonal cuts on each post.

Likewise, the posts of this elaborate gingerbread fence are simply the letter "Z," slightly modified.

I spent a weekend in Key West and saw this distinctive fence there. In Key West, one could form a walking tour just around great fences and porch trim.

This was my favorite fence in Key West, and one that's often photographed by tourists. Each cutout insect or animal is an individual design.

Here's a common Key West fence design, though I photographed this particular fence on St. Pete Beach. I'm sure I've missed a few beauties in my area, and if I do find more, I'll add them to this posting.
.
Posted by Mark D. Ruffner at 7:30 AM 10 comments