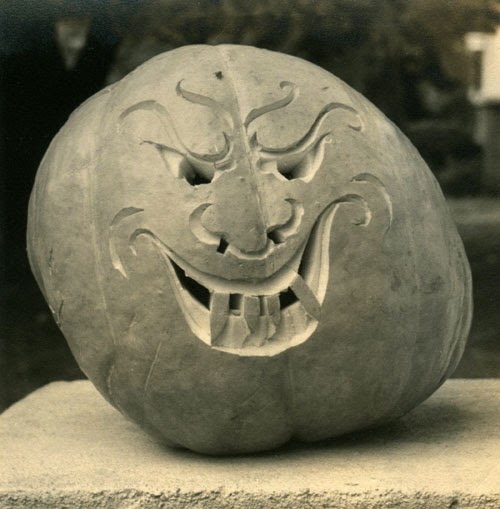 I'll wish you a Happy Halloween by sharing a pumpkin that my father carved 56 years ago. At that time, we lived in a bungalow, in a small Virgina town.

My maternal grandfather, who was never without his Zeiss Ikon camera, took the photo. He documented virtually every aspect of our 1950s life, for which I am now very grateful. 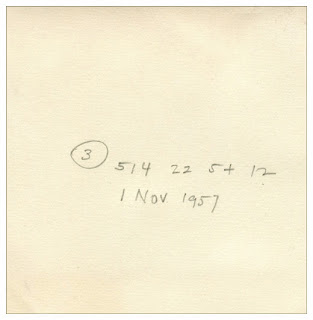 My grandfather was an extremely meticulous person, and the back of every photo bears a series of numbers, sometimes in rows and sometimes in columns, as though they're waiting to be added up.

That was back in the day when Kodak film came in metal containers like the ones above, and my grandfather neatly stored film negatives in hundreds of such containers, in stacked cooking pans. My guess is that he printed three copies of the 22nd negative, from the 514th container of film. The other numbers probably related to his adjustments in the darkroom. That sure is a far cry from digital photos, thumb drives and iPhoto!


Wishing you a Happy Halloween!

Migration of the Monarch Butterflies

This past week, seven friends and I went on a trip to the little town of Carrabelle, Florida to experience the yearly migration of Monarch butterflies from North America to Mexico. The Monarchs pass through the Carrabelle area by the millions, and can be seen in great clouds, like the one above.

We arrived towards the end of the migration, and while we didn't see clouds of butterflies, we did see scores of butterflies wherever there were wild flowers, especially along the roadsides and the nearby St. Marks National Wildlife Refuge.

Refuge staff and volunteers participate in national studies of the health and population trends of the Monarchs, in part by tagging them. Tagged Monarchs coming from the east of the Rocky Mountains and passing through the refuge have been recaptured as far south as Central Mexico.

Monarch butterflies can travel more than 50 miles per day by catching and riding thermals. It takes one generation (living 6-9 months) to fly south, and four generations (that each live only one month) to return north.

The Monarchs are not alone at the refuge; I was quite taken by the beautiful orange Gulf Fritillary, which is actually more colorful than the Monarch, though smaller.

Unfortunately, Monarch butterfly populations are dwindling because development along their route is erasing the nectar flowers by which they sustain themselves.

When we were in the wildlife refuge, we saw this young coyote, and all agreed that he was in need of sustenance, too.


The butterfly excursion was a great excuse for a fun group vacation — most of us have known each other for at least 25 years. Half the group, myself included, stayed in a 1900 railroad hotel, and half stayed in a cottage also owned by the hotel proprietors. There were great conversations on the cottage porch . . . 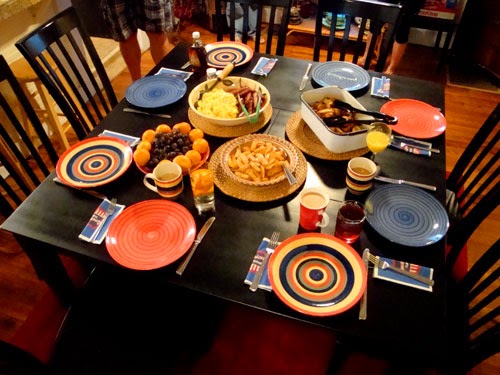 . . . and great breakfasts each morning inside the cottage. The folks at the cottage had a good laugh because they knew that if the plates weren't interspersed by color, I'd probably rearrange them. (And they'd be right!)

As you can see, Carrabelle is a really small town, so after good conversation and hearty breakfasts, we piled into cars and traveled either to the wildlife refuge or to the quaint coastal town of Apalachicola.

Apalachicola is a fishing town known for its good oysters. I took this photo at a fun shop called the Tin Shed. It sold some touristy stuff, but also interesting nautical antiques.

Apalachicola was a major 19th-century seaport. Between 1828 and 1928, 204 "sidewheelers" and "sternwheelers" docked there. It was also the site of the country's first sponge exchange, in 1831. Waterfront real estate in Apalachicola was in such demand that in 1860, when the average laborer earned $306 per year (for a 60-hour week), $13,000 was refused for a waterfront lot. 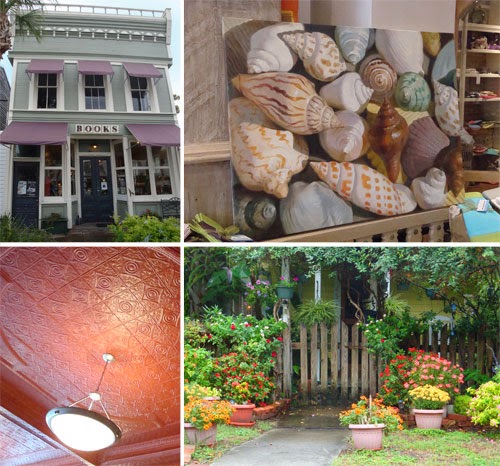 Today Apalachicola is refashioning itself as a town of trendy shops, cafés and fine dining.
.

Off on an Adventure

I'm off for several days on an adventure to the "Panhandle" of Florida. I hope to have an interesting story to share with you when I get back (because something very special happens in the Panhandle every year).

Have a great weekend,

I might have named this posting "Christopher Still, Florida's Artist" because few artists have represented the history, beauty and unique qualities of my state as well as Christopher Still. Above is Still's representation of the state seal, which features a Seminole Indian woman. Below is the actual seal, which is also displayed on the state flag.


Christopher Still (b. 1961) won awards and scholarships as a teenager, and eventually attended the Pennsylvania Academy of the Fine Arts on a scholarship. He took two tours of Europe, studying the techniques of Italian, Dutch, German and French masters.

Still returned to Florida, where he has become well-known for his scenic views of the state, often including historic elements and symbolism. On Sacred Ground, above, is one of a number of Still paintings that depict Seminole Indians, proud warriors who are equally remembered for their distinctively intricate style of dress.

Above is Land of Promise, depicting the time of Florida's early settlers and their homesteads. Still often tells a narrative by including a trompe l' oeil frame adorned with objects that relate to the central theme.

A great example is Changing Tides, which shows — through dozens of objects — the sponge diving history of Still's own hometown, Tarpon Springs, Florida.

My own favorite trompe l'oeil by Christopher Still is Orchids, which is now in St. Petersburg's Museum of Fine Arts.

Here's a portrait of Silas Dent, a famous Florida character known as "The Happy Hermit of Cabbage Key." Silas Dent found happiness living an extremely simple and solitary life in a grass hut, and Still has portrayed him here with milk and honey.

You can read more about the well-loved Silas Dent here.

Still usually works on a large scale and has done numerous murals. In 1999, he was commissioned by the Florida House of Representatives to create 10 murals for the capitol building. Eight are of Florida's history, from pre-settlement to contemporary time, and two are of Florida's aquatic life. Above is The Spring of Life.

A recent mural (2007) is this image for the Sandpearl Resort on Clearwater Beach. To give you a sense of scale, here's a photograph of Christopher at work on the painting . . .


You can see more of Christopher Still's artwork at his own site:
http://www.christopherstill.com/
.
Posted by Mark D. Ruffner at 8:00 AM 18 comments

My blogging friend Stefen, of Architect Design™ occasionally writes about Marjorie Merriweather Post, her extravagant Hillwood mansion, and her equally extravagant style of living. You can read his article on a Hillwood tour here.

Marjorie Merriweather Post was the heir of C. W. Post, the founder of Postum Cereal Company, and at his death she became the wealthiest woman in America. Mrs. Post was a shrewd businessperson in her own right — she saw the future of frozen food and championed it, eventually forming the General Foods Corporation.

Mrs. Post was a gracious hostess, but also one tough cookie. The stories of her quest for perfection abound. I was recently going through some old magazine clippings (from the days when photo magazines were huge in format) and came across this photo of Mrs. Post, inspecting her table before a party for the French ambassador.

"Mrs. Post, who has a passion for perfection, gives a searching scrutiny to the table setting, the final step in this all-important ritual — which began right after breakfast. Three cloths of rare old lace were spread and stitched together to make one. When the job was done, not a seam or thread showed. Mrs. Post would not tolerate this any more than she would having the table itself off center. The centering was achieved with the aid of a special spotlight in the ceiling. Then out came the measuring sticks for the really intricate part of the operation [the opposite page apparently showed servants centering the place settings with measuring sticks.]. At precisely 7:30 p.m., after the florist had left and every object on the glittering table had been positioned to the centimeter, eight footmen and two wine men lined up for final briefing. At exactly 7:45, Mrs. Post herself appeared for this final last look. At 8:30, when the French ambassador led the 26 other guests into the French Regency paneled dining room, it seemed a shame to disturb such sheer symmetry by eating."

"Footman Arthur Field, who spends most of his time polishing silver and gold, works on a small part of Mrs. Post's silver-gilt service for 36. At her Adirondack camp, in a less formal mood, Mrs. Post sometimes uses a service she bought through Sears, Roebuck."
.
Posted by Mark D. Ruffner at 8:00 AM 16 comments 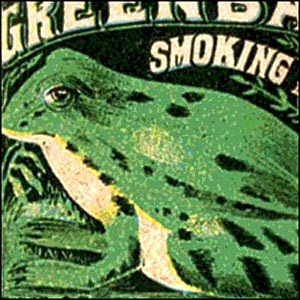 As I have mentioned before, it's ironic that I've never smoked, for my ephemera collection is heavy with good tobacco advertising of the 19th century.

In my side bar page on antique trade cards, I note that 19th century advertising often had imagery that had little or nothing to do with the product being sold. The charming card above, which measures 12¼" x 7½", is a prime example. 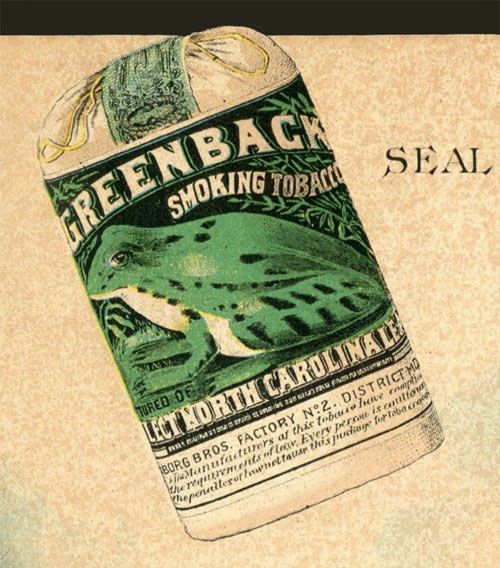 For my own collecting purposes — which are very much rooted in an interest of graphic history — I like that the card beautifully illustrates the tobacco's packaging. 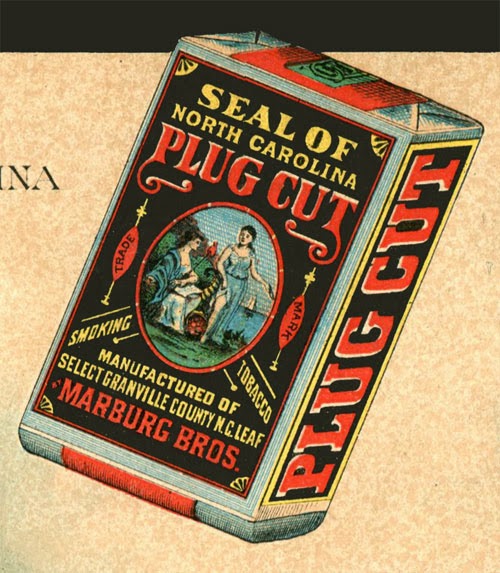 While the plug cut is wrapped in paper, you can see that the Greenback tobacco is a cloth bag with a draw string, surrounded by a paper label and seal. The paper around the Greenback would have been discarded immediately, so I would surmise that if any labels are still in existence, they'd be mint and unused. 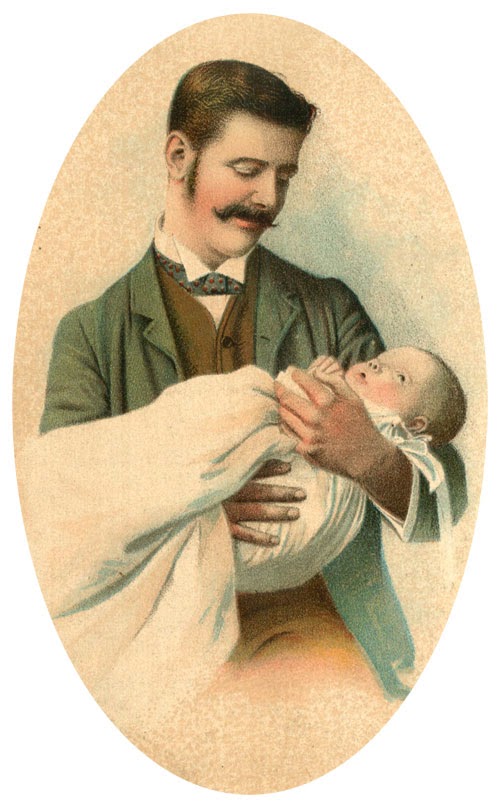 The quality of the artwork and lithography is very fine. While Marburg Brothers was obviously in North Carolina, the advertising was done by Hoen & Co. of Baltimore, Maryland. If you click on the link, you'll see that the lithography was probably the most advanced of its time.