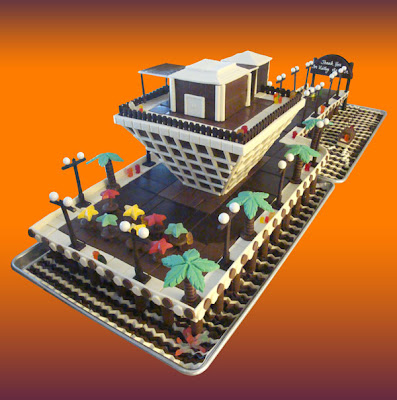 Today, an architectural confection for you! Chelsey Cash of Schakolad has created a chocolate replica of the St. Petersburg Pier. This is actually a tribute to the 36-year-old landmark, which is soon to be replaced by a newer pier. Chelsey's masterpiece will be on view at Schakolad through September, after which I'll be volunteering at my favorite chocolate company (to help dispose of the pier).
Posted by Mark D. Ruffner at 7:00 AM 0 comments

I mentioned in my last post that my grandfather was an influence in my love of things classical. I would be remiss if I didn't also mention the influence of my father, who was an architect by training, though not by profession. 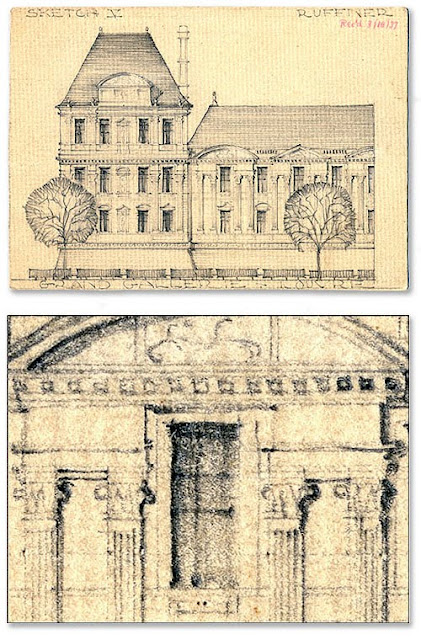 One of my father's professors required students to turn in weekly index cards of different architectural styles. The top image is a 5" x 3.5" rendering of the Louvre. The bottom image is a detail of the center of the sketch, and measures approximately .75". This is the only such card of his that I have – I would dearly love to have seen the whole set!

I have a thing for finials and urns, and sometimes I hit the jackpot and find both in the same object. I found this wooden finial recently at a St. Petersburg antique shop. The carved flame and wreath base made it a must-have. Incidentally, the correct description of the grooves, as they would apply to columns, is "serpentine fluting."

The base has one corner that needs to be repaired. It looks as though there might have been a struggle to pry it from its last home, but how fortunate that there was no further damage. 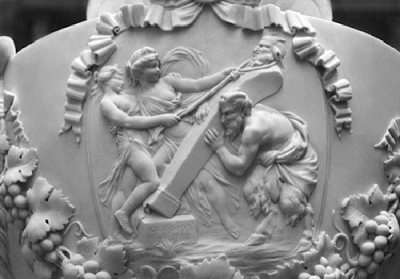 How is it that some of us are so drawn to certain iconic shapes and objects? Is it due to genes, past lives at Versailles, teachers, our environment? I have no doubt that part of my attraction for things classical is because – when I was just out of toddlerhood – I spent many hours following my grandfather as he methodically documented Washington, D. C.'s National Gallery. He used a Zeiss Ikon, always shot in black and white, and always printed on a heavy matte paper. Like the one above, his images were rich in contrast and all these years later, still wonderful to study. This is a detail of an ornamental urn by the French sculptor Claude Michel, known as Clodion. It was carved in 1785.
Posted by Mark D. Ruffner at 7:00 AM 7 comments

David Airey has an inspiring and beautiful blog named Logo Design Love. On August 13, he featured the witty design work of Johnson Banks under the title, "What do you get when you cross ..." Banks imagines the merger of corporations and then combines their logos to make interesting and amusing typographic statements.

Banks' work inspired me to design a logo for a new mega company of great style, the merger of Polo and Izod! Found only in the very best stores. 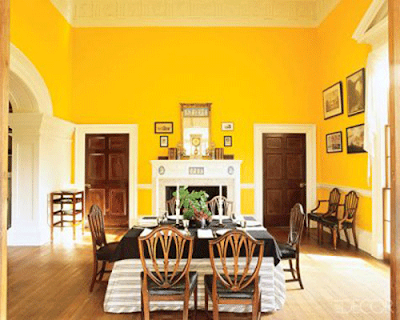 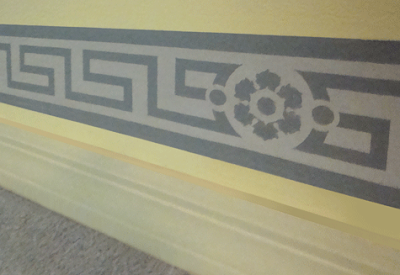 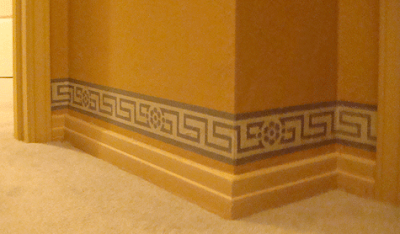 When newcomers to the house realize that the Greek key isn't stenciled, they always say, "That's insane!" (Actually they say, "You're insane!") But the truth of the matter is that I divided the project into two-hour segments per evening, and it was very easy and meditative. I skipped watching TV, relaxed on the floor and solved all the world's problems.
Posted by Mark D. Ruffner at 8:45 AM 3 comments

Email ThisBlogThis!Share to TwitterShare to FacebookShare to Pinterest
Links to this post
Labels: Frank Lloyd Wright, Greek keys, The Grammar of Ornament

About a year ago, Susan Halttunen, a good friend and a fine designer, made me aware of Nick Olsen, who is a rising star in the New York design world. When I Googled Nick, I discovered that he had a blog, and so was introduced to the world of blogging. I quickly discovered so many interesting and beautifully designed sites from all over, and I realized that I also had things to share with the blogging community. This then  inaugurates All Things Ruffnerian, a Design Blog and More — all those passions I'd love to share with you! So a special thanks to Susan for the inspiration, and I hope you enjoys my posts!
Posted by Mark D. Ruffner at 8:30 AM 4 comments