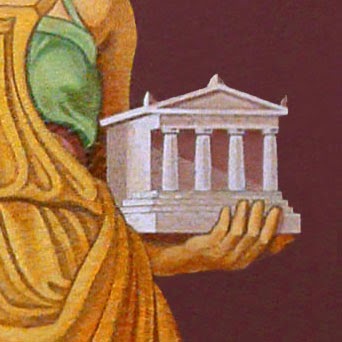 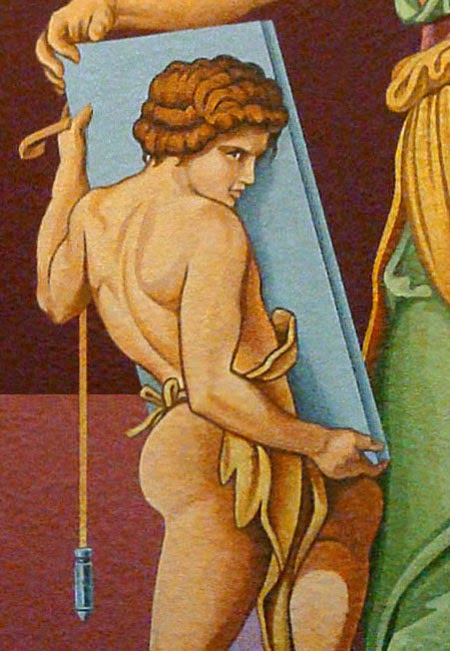 Pompeii No.21: The Muse of Sculpture 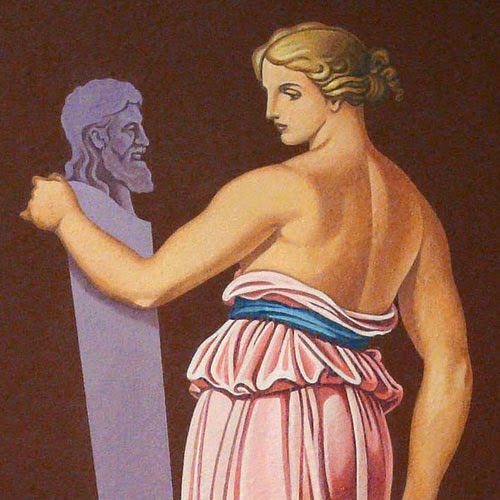 The Muse of Sculpture was the Bürkner engraving that I thought most resembled a Michelangelo study.

Bürkner understood that Michelangelo's female bodies were probably all based on the male form (one wonders whether Michelangelo ever did use a female model). Bürkner also had a good sense of Michelangelo's rather heroic poses and the way he draped clothing.

In fact I've made very few changes to Bürkner's engraved design. My only real critique of Bürkner's engraving is that the muse's sculpture is a weak design, and it's definitely reflective of the Victorian era. I also have an aversion to mythical entities with insect wings.


Only the tiniest of sprites —
like Tinker Bell — should merit them! 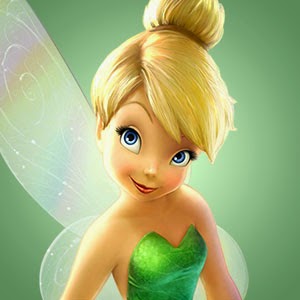 Because the children depicted with the Muse of Painting were not winged, I decided to drop the wings on this little attendant as well. 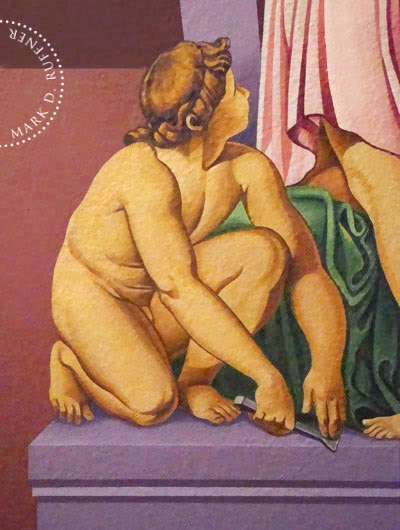 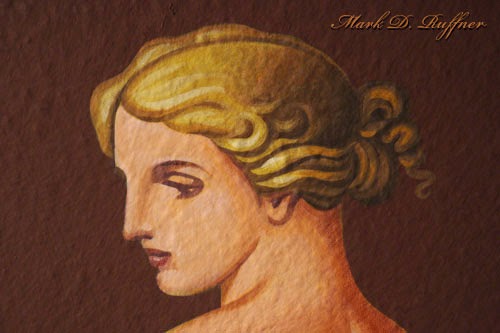 I looked at several renditions of blond hair by Michelangelo and noticed that he would sometimes add a tint of red or orange to the yellow. Perhaps the Muse of Sculpture is a strawberry blond.


The finished Muse of Sculpture is below.

Next week, we'll look at

the Muse of Architecture.
I hope you'll join me then!

In my last posting, several of my blogging friends suggested that something extra was needed around or above the muse. I want to assure my readers that I am still unveiling the Pompeii Room in its early stages, so please don't think for a moment that this is near completion!

Pompeii No.20: The Muse of Painting 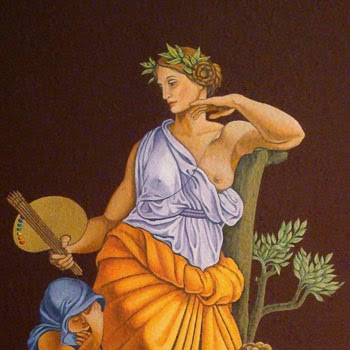 As I studied this engraving by the 19th-century illustrator, Hugo Bürkner, it occurred to me that he had in turn studied Michelangelo, and that my color interpretation of Bürkner's engraving would benefit from my revisiting Michelangelo and his work.

The great irony of this resplendent painting by Michelangelo, the tondo of the Holy Family, is that its creator didn't consider himself a painter and vigorously resisted most painting assignments. Even more amazing is that the man who commissioned this as a wedding gift for his wife was dissatisfied with the result.

In all of Renaissance painting, one will be hard pressed to find a more sensitively rendered infant Jesus.

I've chosen the tondo primarily as a color reference, and in particular, I'm looking at Michelangelo's sumptuous fabrics. 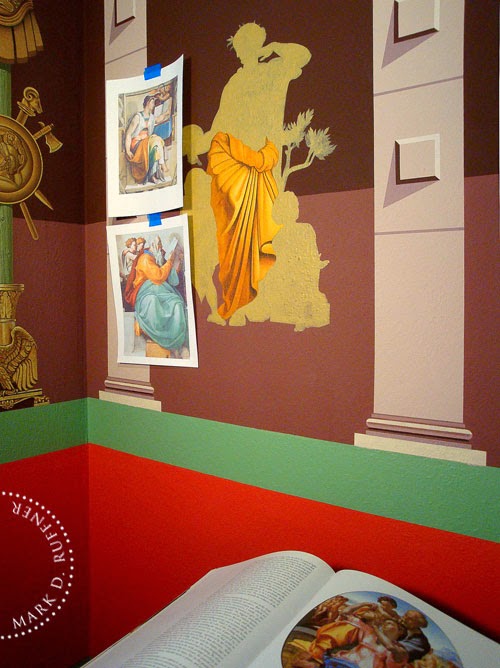 I begin with lots of color reference at hand, and by working upon a light, neutral silhouette. To work directly on those dark background colors would be difficult for me (though I have known artists who do like to work from dark to light).

I've made a number of changes to Bürkner's original design to suit my own purposes:

Below is the final Muse of Painting.

No matter how much color correction I do, the purple of the base translates more vividly on the Internet. It is in actuality less intense.

Next week we'll go to the opposite wall
and look at the Muse of Sculpture.
I hope you'll join me then!
.
Posted by Mark D. Ruffner at 7:30 AM 10 comments

Pompeii No.19: Finding the Muse 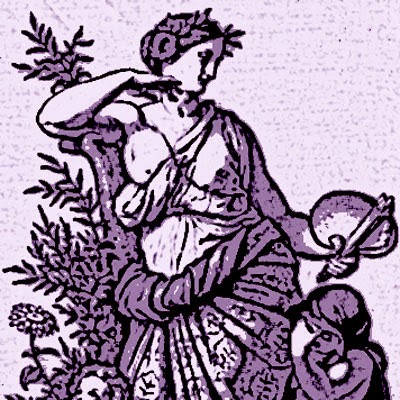 In my last three postings, we looked at the trophy as an ornament, as well as my interpretations of the trophy, which now decorate both sides of the dining room window.

Now it's time to decorate the three panels that are x'd above. My thought all along was that these areas should have figures, as so many Pompeian murals did.

Originally, I was planning on three figures posed heroically, like this image by Domenico Ghirlandaio. If I used centurions, it would be a nice continuation of the trophy theme.

I also considered using statues of Roman gods, like this one of Jupiter with his lightning bolts, and maybe putting them in alcoves like the image on the right. There were certainly a lot of Roman gods from which to choose!

Another thought was to paint what I would call vignettes, figures on plain backgrounds. The painting on the right you might call a celebrity portrait; it's of the Greek playwright Menander, who authored more than a hundred comedies.

In Pompeian decoration — and its numerous revivals — such figures often float in the center of a panel, but in the back of my mind . . . 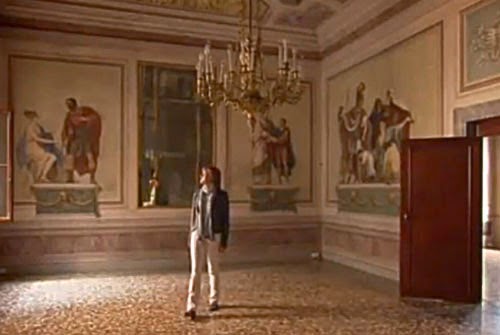 . . . I really liked the look of the grounded figures shown above. This is a screen-save from a video on British royal palaces. Fiona Bruce is walking through the Venitian lodging of the 18th-century British consul, Joseph Smith. (If you are like I am, you're always admiring the wallpaper at the very moment in a movie when someone gets killed!) I like those pedestals, and if I had figures at the bottom of the panels, there would still be room for ornamentation between the figures and the garlands.

In my wanderings through the Internet, I came upon these engravings by a 19th-century German illustrator named Hugo Bürkner (1818-1897). What struck me about these images is that Bürkner obviously studied Michelangelo. You can see that especially in the central engraving, in the musculature and draping of cloth. I would make some changes, but I think these muses of painting, sculpture and architecture would make dandy Pompeian motifs.

And it would also be a nice nod to Michelangelo, whose tomb coincidentally bears the three muses of painting, sculpture and architecture. Michelangelo's tomb, by the way, was designed by Vasari, remembered today primarily for his biographies of other artists.


So it's settled.
Next week I'll unveil the first panel figure,
the Muse of Painting!
.
Posted by Mark D. Ruffner at 7:30 AM 16 comments