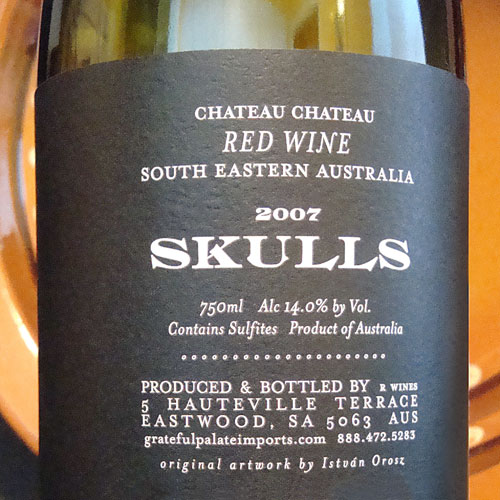 I recently had a festive dinner at Sandy and Greg's, with neighbors of theirs, Chris and Gary. Gary and Chris brought the main course and the second hit of the evening, an Australian red wine called Skulls. This is what Skulls looks like from the front ... 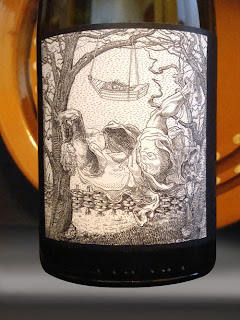 ... and this is the Skulls bottle from the back.
Now take a closer look at the label.

This ingenious drawing is by Istvan Orosz (b.1951), a Hungarian graphic designer, poster artist and film director. Orosz is very interested in illusions, and in particular, anamorphosis, which Wikipedia defines as "a distorted projection or perspective requiring the viewer to use special devices or occupy a specific vantage point to reconstitute the image." Below is an anamorph by Istvan Orosz. 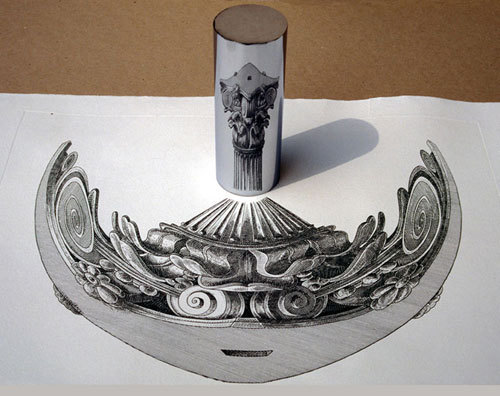 Another prime example of anamorphosis is Hans Holbein's 1533 painting, The Ambassadors, with its famous foreground skull. So there you have it, two skull illusions in one posting.

"And what about the wine?" you ask. It was good, but I'll let Robert Parker's Wine Advocate describe it: "The 2007 Skulls Red Wine is a blend of 60% Grenache and 40% Mataro raised in stainless steel. Dark ruby-colored, it offers up an expressive bouquet of garrigue, forest floor, spice box and cherry. Forward, medium-bodied and friendly, this savory effort will drink well over the next six years."
Posted by Mark D. Ruffner at 6:20 AM