The Genius Behind Tiffany Lamps


Last month I was in Winter Park, Florida, for my second visit to the Charles Hosmer Morse Museum of American Art. The museum is known primarily for its collection of Tiffany glass, and artifacts relating to Louis Comfort Tiffany. 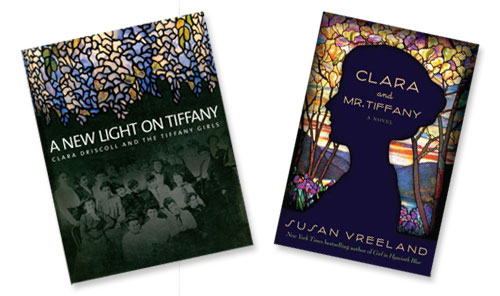 Our family friend, Yvonne, had renewed my own interest in Tiffany by sharing two recent books about Clara Driscoll, the woman at the top of this posting. A New Light on Tiffany: Clara Driscoll and the Tiffany Girls, by Martin Eidelberg, Nina Gray and Margaret K. Hofer is a fine companion piece to the novel, Clara and Mr. Tiffany, by Susan Vreeland.

Both books describe how Clara Driscoll (1861-1944) was a driving force behind the mosaic glass creations that we most often associate with Louis Comfort Tiffany, despite the fact that she got almost no credit in her own lifetime.

For those of you who are addicted to emails and tweeting, it might be worth noting that Clara Driscoll is finally getting her due because she wrote voluminous letters about her work, letters that were shared and saved by her family.

Through the letters, which include designs and accounts of meetings, it is apparent that Driscoll came up with the idea for Tiffany's iconic mosaic glass lamp shades. She produced hundreds of glass designs for everything from windows to screens to desk accessories, and some of those designs are among Tiffany's most famous pieces. Yet the only credit she ever got was when exposition juries required that every member of a design team be mentioned. (For that reason, Clara did get credit for the Dragonfly Lamp pictured above, which recently sold at auction for $554,500.)

The Women's Glass Cutting Department was a separate branch of the Tiffany company, staffed by dozens of women who were all managed by Clara Driscoll. Driscoll met on a near-daily basis with Louis Comfort Tiffany, who usually sided with her as she battled her male counterparts, who often gave her little respect. Despite the fact that today she probably would have merited pay worthy of a full partner, Clara Driscoll earned a modest income and lived most of her adult life in boarding houses. She was required to leave the company when she married.

Clara Driscoll ended her life painting silk scarves, none of which have survived. But her letters did survive, and they have recently shed light on a creative genius who left a big mark on our collective conscious.

To read an excellent account of how two historians simultaneously discovered the extent of Clara Driscoll's work and influence, sleuthing through those letters, I direct you to a New York Times article, here.

Clara Driscoll is not to be confused with a lady of the same name and the same time who was the Texas philanthropist who saved the Alamo from demolition. That's another interesting story.
.
.