Pope Sixtus V (1585-1590), known as The Iron Pope, came from a poor family from the village of Montalto. The family name was Peretti, so Pope Sixtus V designed his crest to include a lion holding a branch of pears. The image above is a painting of the pope which hangs in the Vatican library that bears his name. Notice that above the painting is a Greek key that incorporates pears. I've recreated the key below.

The tiara was a wedding gift from Princess Alice to her daughter-in-law, Queen Elizabeth II, who in turn gave it to Princess Anne. 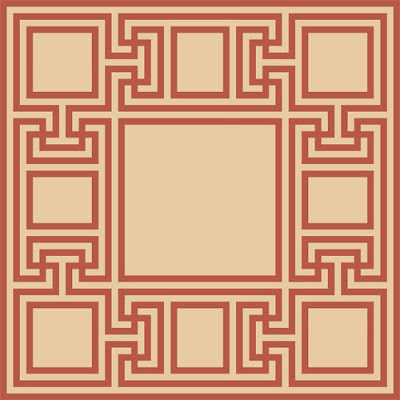 Here, I've recreated the key design of a Roman mosaic floor found in Britain. To see and learn about the Sea God Mosaic, featuring a portrait of Oceanus, go here.

My entire series of Greek key designs can be found on my side bar — just look for the brown stele.
.