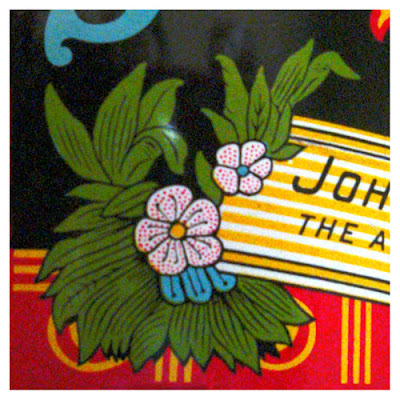 As a graphic designer, I'm always inspired by the colorful, exuberant packaging designs of the 19th century. The tobacco industry had some of the best designs and that's why, though I've never smoked, I've collected lots of tobacco advertising. 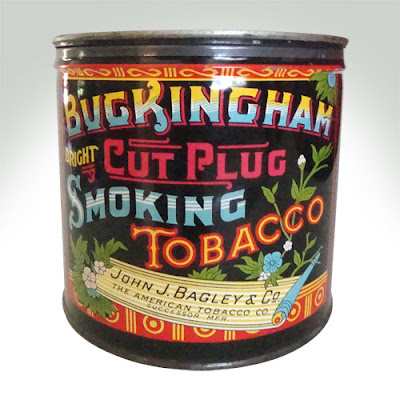 This is one of my favorite tins, Buckingham Bright Cut Plug Smoking Tobacco. While the design is from the 1800s, the actual tin is probably from the late 1920s. It's in remarkable condition. 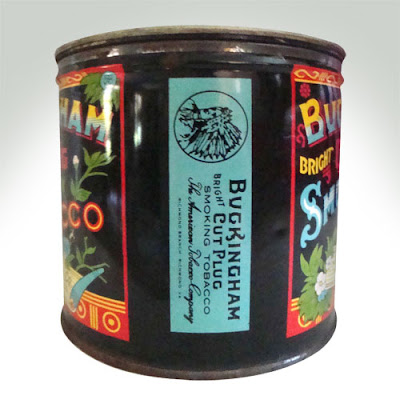 The product was produced by the American Tobacco Company, which was founded by J. B. (James Buchanan) Duke in 1890. Duke acquired more than 200 competitors, in part because he quickly embraced a mechanical cigarette-rolling machine that other tobacco companies had shied away from. Within 20 years of its founding, the American Tobacco Company controlled approximately 80% of tobacco products in the United States. Then, in a process which began in 1907, the Sherman Anti-Trust Act reduced Duke's company to four separate tobacco companies.

In 1924, J. B. Duke endowed Trinity College of Durham, North Carolina with such a substantial gift that the college changed its name to Duke University in honor of J.B.'s father, Washington Duke.
.
Posted by Mark D. Ruffner at 2:00 AM