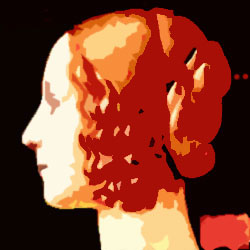 My blogging friend Yvette of In So Many Words recently posted on 10 female portraits she'd love to own. I don't have enough wall space for 10 more portraits, but I thought today I'd share 10 portraits of women that I enjoy studying (the portraits, I mean!). We'll look at them in the order they were painted.


This is a portrait of Giovanna Tornabuoni, painted by Ghirlandaio in 1488. Giovanna was a young noblewoman who died in childbirth that same year. The painting is rich in detail, and yet has a flatness that appeals to me for its very graphic quality. The beautifully modeled face contrasts with straight lines and simple shapes that could make a cubist's heart skip a couple of beats. I view this as a very modern painting, along the line of an early work by David Hockney.


Leonardo da Vinci painted Cecilia Gallerani circa 1490, about two years after Ghirlandaio's portrait of Giovanna. Cecilia was the 16-year-old mistress of the Duke of Milan, Ludovico Sforza, for whom Leonardo produced many designs ranging from battlements to party decorations. The ermine is most certainly symbolic — as well as representing purity, it was the Duke's heraldic animal. I like this portrait for that graceful hand, and it's interesting that Leonardo mirrored the ermine's paw with equal grace. Few people have painted more beautiful hands than da Vinci, though, as one looks more closely at the painting, it really isn't the hand of a 16-year-old!


Lady With a Red Hat was painted by Johannes Vermeer in 1666, and came to the National Gallery of Art in Washington, D.C. through the collection of Andrew Mellon. I have a hunch that Vermeer was an alien time-traveler who ended up in the Netherlands with a knowledge of light from beyond our own time. His incredible highlights and diffused edges suggest that he studied optics and perhaps even used optic devices to which his contemporaries were not privy.


Here's a portrait of Mrs. Ezekiel Goldthwait (Elizabeth Lewis), painted by John Singleton Copley in 1771. This painting has special meaning for me because as a young artist I came to the realization, through copying it, that colors always appear more vibrant when they are juxtaposed with dark neutrals. Copley's finest portraits consistently feature bright spots that leap out of very muted palettes.

As I look back over the portraits included so far, I notice a lot of fine fabrics. What can I say — I like luxe! And few excelled at that as well as Jean-Auguste-Dominique Ingres, who painted this portrait of Princess de Broglie in 1853. Ingres' detailed rendering of satins, paisleys and jewelry made him popular in the French court, and yet he regarded portraits as the lesser of his work. Compare this image with the one of Mrs. Goldthwait, and you see that both artists rendered luxury in the bottom half of the painting and then reserved the top half for the face to pop out of simplicity. In each case, the painting is divided almost exactly in half.

By contrast, Franz Xaver Winterhalter's 1859 portrait of Countess Lamsdorff is busy-ness through and through. And yet, we are drawn — despite all the detail — to the sitter's face. How does that happen? 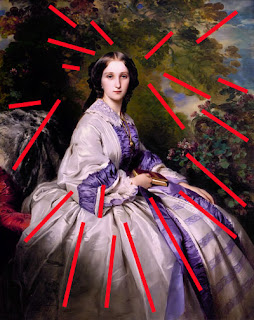 First, Winterhalter paints many lines in both the dress and the natural elements that converge on the face. And if that were not enough, he creates a spiral of movement around the face, sort of a visual vortex. 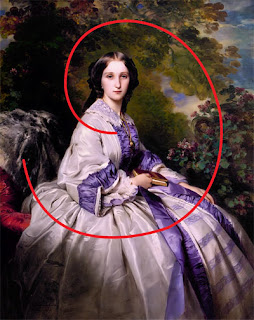 See how the shadow around the bottom of the dress forms an arc that moves up into the tree and around the head? Brilliant!

Alphonse Mucha painted Zodiac in 1896. His compositions are interesting because he used layers of decorative detail to form essentially solid blocks of color. Lush background detail is outlined in lighter colors or thinner lines, while the portrait itself gets a heavy black outline. But even here, that outline modulates to lightness as it moves down the neck and into the neckline. Isn't it interesting to see the different ways that artists simultaneously lavish and curb detail?

Carl Larsson's 1906 portrait of his wife Karin is interesting in that the center of the composition is her azalea. Looking at Larsson's work, one can appreciate what a natural drawer and superb draftsman he was. It seems to me as though he must neither have used an eraser nor ever blotted a line.

Tamara de Lempicka is one of my favorite artists — I've linked to her biography because it's such interesting reading. I've always been intrigued (and a little jealous) of artists who attain such a recognizably distinct style. This is a 1928 portrait of Arlette Boucard, daughter of Dr. Pierre Boucard, also painted by Lempicka (and an interesting story in itself). Tamara de Lempicka's work is sometimes described as "soft cubism," and I'd be hard-pressed to name anyone who surpasses in that genre. It's as though Ingres meets Leger in the form of one person.

My final choice for this posting is this stunning portrait by Pietro Annigoni (1910 – 1988). I'm sorry to say that I can't identify the sitter — perhaps a reader can help me fill in the blank. Annigoni was highly influenced by the Italian Renaissance, and his paintings seem more a continuation of that period rather than a reinterpretation. His work often reminds me of Hans Holbein, and so it seems fitting that Annigoni was made famous worldwide by his 1956 portrait of Queen Elizabeth II.
.
Posted by Mark D. Ruffner at 6:30 AM