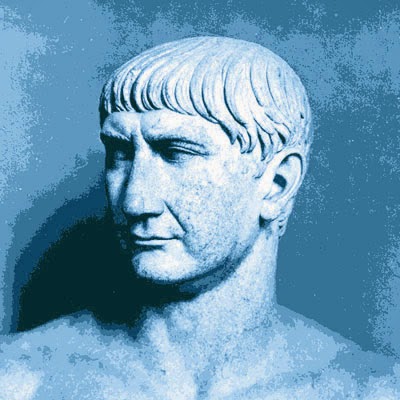 In my last posting I dedicated a dining room bust to the Emperor Nerva. His predecessors had been so cruel and tyrannical, and Nerva was so just by comparison, that he was perceived by the army to be weak. Fearing his own assassination, Nerva adopted the popular Trajan, a general of Spanish origin, and named him his successor. Nerva thereby placated the restless army, and soon thereafter died peacefully in his sleep.

Trajan (53-117 A.D.), a soldier-emperor, was regarded in his own time as the best of Roman emperors, and his reputation has endured. The Roman Empire reached its maximum territory under his reign, and if you click on the map above, you can see the extent of what he controlled. Trajan inaugurated public works and social welfare, and presided at a time of peace and prosperity. The Roman Senate would venerate all future emperors with the words, "Be luckier than Augustus and better than Trajan."

Almost all images of Trajan reveal a commanding figure with a low brow and a stern countenance. For my transom bas relief, I've chosen the image on the right. I like it because it's a little softer, yet shows someone who must have been very calculating. 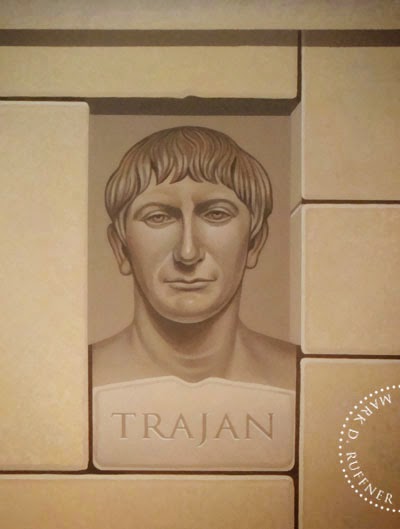 Here's my version of the Emperor Trajan. And below is a perspective of the finished transom.

By now you may have figured out that the remaining three of the Five Good Emperors will each be painted above one of the three muses on the other walls of my room. I hope you join me for my next posting and the fun of another imperial portrait!

•  •  •
I posted earlier about a modern typeface called "Trajan," based on the inscription of the famous Trajan Column. You can find it here. Appropriately, the incised names of "Nerva" and "Trajan" are in the Trajan font, which I expanded for spacing.
.
Posted by Mark D. Ruffner at 8:00 AM