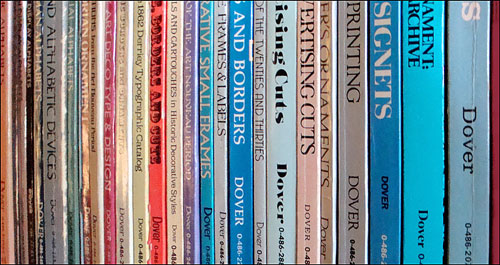 As I've mentioned, I started out my career as a commercial artist, long before personal computers and the current multitude of clip art services. Non-artists often assume that artists conceive off the top of their head, when in fact most professional artists (designers, sculptors, architects, et al) are both careful observers and good researchers. As I was doing commercial jobs, I relied on my own photography as reference, and family and friends often modeled.


I also used a large collection of Dover books. Dover Publications has been in business since 1941, and for decades it's been of great use to designers. That's because it publishes, in paperback form, 17th, 18th, 19th and 20th century art that is now in the public domain and copyright-free. One can incorporate antique elements into designs with great effect, and now Dover is further providing their wares in digital form.
I have to add though, that as a commercial artist I seldom used clip art in its raw form (as is commonly done today). For me, Dover books - and any other art references - were a starting point, a point of departure. Here's a great example: 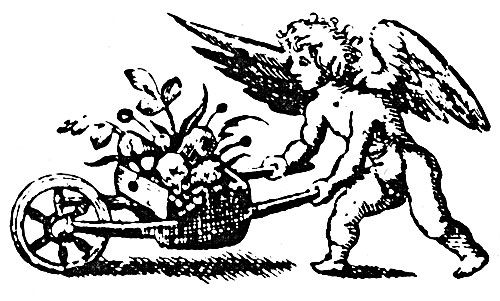 I was commissioned to design a logo for a local non-profit foundation that does good deeds, really a bunch of angels. I found this delightful engraving in a Dover book, and I thought it fit the bill. The engraving is French and dates to the 1600s. I'm not enamored of the drawing itself - the anatomy is not quite right - but I love the idea. I find it delightful that cherubs and angels might sow and reap, even as we do. The foundation liked the image and association, too.

Here is my final design. I refined this many times in pen and ink on paper, and then redrew my final design (which at that point included pieces of paper pasted together) by computer.