Do you have a regular visitor to your yard, some exotic or delightful creature that makes you smile and whom you eventually regard as your very own mascot? Mine is the ibis, a bird about two feet high that almost always comes in flocks.

Ibises are wading birds who ordinarily feed on crustaceans, but because there are no crustaceans in my yard, I suppose that they have a varied diet. Remember the funny toy bird from decades ago that was made of plastic and sponges? The toy bird plunged his head into a glass of water and then would, through some simple law of physics, eventually become upright again. Well, the ibis makes the same movement, albeit at a more rapid pace. A flock of ibises will land in my lawn and then, with great thoroughness, move across it like a well-practiced and synchronized dowsing team. They have orange bills that tend to be dirty for the first six inches. I think they're drilling for grubs, and the sight is comical and endearing.


One distinctive feature of the ibis is that it has very blue eyes!
The ancient Egyptians saw the ibis as a sacred bird and deified it.This is an 1888 painting titled Alethe, Attendant of the Sacred Ibis in the Great Temple of Isis at Memphis AD 255, by the artist Edwin Long. It illustrates a tragic story by Thomas Moore of an Egyptian priestess who was secretly Christian, and who became a martyr. Louvre curator Jean-Marcel Humbert notes that Long painted an "implausible" Egyptian costume. 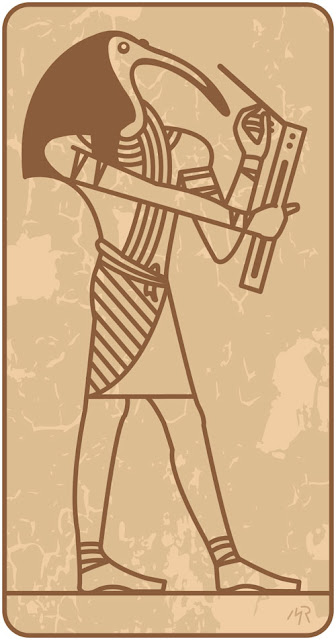 Here I've recreated a hieroglyphic of the ibis god. Known as Tehuti by the Egyptians and named Thoth by the Greeks, he was the counterpart of the Greek's Hermes and the Roman's Mercury. Thoth was usually depicted with a palette and sometimes was crowned with a moon (like Diana). He was lord of the moon, the god of wisdom, writing and invention, and was the messenger and spokesman of the gods. He was also the protector of scribes.

So while I chuckle when I see my ibis friends, this blogger is also honored when they choose my yard for their sustenance!
.
Posted by Mark D. Ruffner at 5:17 AM