Herman Zapf (1918-2005) ranks as one of the great typographers of the 20th century. It's a good bet that the computer at which you're now sitting came already loaded with the fonts above, just a few of his many designs.

Zapf designed Melior in 1952. He was intrigued with the shape of the 50's television screen and based the Melior "O" on that form. It's interesting to note that type designers often start their work with the "o," which then becomes the template for many lower case letters. 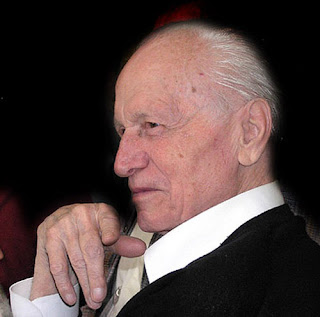 Most Americans want to pronounce "Zapf" like "half," but the name rhymes more closely with "cough." I had the honor of taking a class with Zapf when I was in college in Pittsburgh, and my lasting impression of him was that he was an exceptionally elegant man. He wore crisp white shirts with French cuffs, and his cuff links were made from gold Roman coins.

Some time ago I designed a logo for the Konglomerati Foundation, a literary center that was dedicated in part to the preservation of letterpress printing. I asked myself, "What would Hermann Zapf do?" (WWHZD), and this is what I came up with. The logo's shape is the interior of the Melior "O."
Posted by Mark D. Ruffner at 7:00 AM