In my last post I mentioned chocolate and cocoa beans, so I'll stay on that subject to make a nice segue into the world of ephemera. I collect ephemera, which Wikipedia defines as, "... transitory written and printed material not intended to be retained or preserved. The word derives from the Greek, meaning things lasting no more than a day." Good examples of ephemera might include concert tickets, cigar bands and menus. The ephemera that I collect is primarily advertising from the late 19th century. 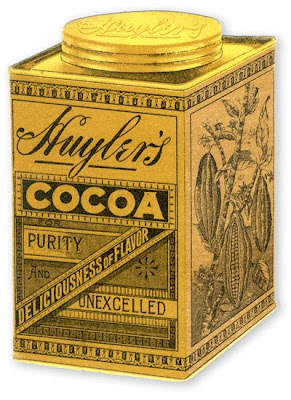 This is a paper die cut of a tin can. It's also known as a trade card. Trade cards were usually distributed by merchandisers at the point of purchase, and they were popular from the 1870s through the mid-1890s. They were little premiums that served both as advertising and as the fodder for Victorian scrapbooks. Because they were lithographed (as opposed to being printed in the modern 4-color process), trade cards were exceptionally bright and colorful. That's because, for example, an orange detail would be an printed with pure orange ink, rather than halftone screens of yellow and red. 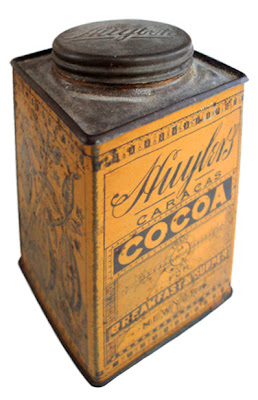 I also collect antique tins (now to a lesser extent than I used to), so it was a real thrill to find this Huyler's can and to reunite it with its paper relative. Both the paper die cut and the tin were lithographed.
Posted by Mark D. Ruffner at 7:10 AM