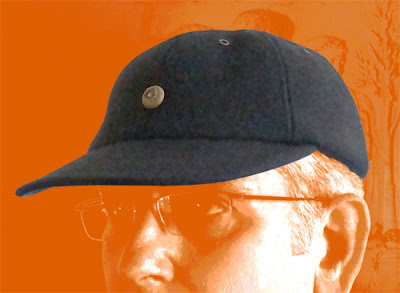 I like to wear baseball caps, though that’s really not my persona. So a while back, I thought it would be fun to buy a well-made baseball cap and turn it into a stylish statement. My idea was to get something plain (which turned out to be a dark blue wool cap from the GAP) and then sew one antique button on the front. I imagined the result would provide a look that was quasi-military, or perhaps Victorian, in an Abner Doubleday sort of way.

After I found the cap, it was time to go antiquing. My first stop was a antique shop where there wasn’t a button in sight. “Are you looking for anything in particular?” said the owner. When I casually mentioned buttons, the owner produced - from behind the counter - the estate of a national button club president! On my very first try, I’d hit the mother lode! And in that one moment of supreme manifesting, my search for one antique button became a wealth of buttons that continues to grow to this day. Now I’m hooked on antique buttons!

My antique buttons. I’m particularly attracted to buttons that have Greek and Roman faces, which apparently was a popular theme.

My friend Martha gave me this beautiful book by Diana Epstein and Millicent Safro, with a foreword by Jim Dine and a preface by Tom Wolfe, no less! Below it are seven of my favorites from the book. They remind me of a set of similar dog buttons I had on a childhood vest.

The authors run a most wonderful store in New York, called Tender Buttons. I hesitate to link to their site for fear that you will go on a button spending spree before I get there.

They say that the emerald buyers in Hong Kong wear sunglasses on their rounds. That way the dealers won’t be able to see their eyes dilate as they feast upon the emeralds in which they're really interested. Perhaps I’ll have to wear my sunglasses when I visit Tender Buttons!
Posted by Mark D. Ruffner at 12:23 AM